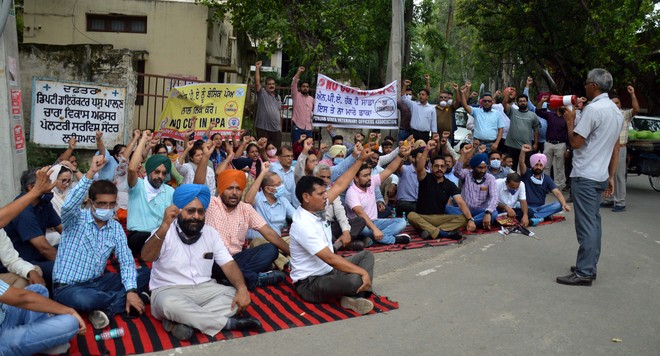 Irked by delaying tactics of the government over the issue of reduction of non-practicing allowance (NPA), veterinary doctors laid a siege to the office of the Deputy Director, Animal Husbandry, here, on Monday.

They held a massive demonstration on the premises of the Deputy Director’s office and expressed anguish amid sloganeering against the government.

District president of the Punjab State Veterinary Officer’s Association Chatinder Singh Rai said the demonstration was in response to a joint call given by the Joint Government Doctors Coordination Committee, boycotting all types of works and it would be continued till Tuesday.

He issued a stern warning that if the Cabinet subcommittee formed by the government to adress the issue did not respond positively to their demands by Tuesday, they will not hesitate to lay siege to the state headquarters of the Director, Animal Husbandry, at Mohali.

All kind of veterinary services, including artificial insemination, vaccination, departmental meetings and trainings, except vetro-legal, emergency cases and postmortem duties were suspended during the protest.

Medical and veterinary doctors of the state are on a warpath since the past five weeks despite that the government is still playing dilly dallying tactics. However, the public is at the receiving end and facing unnecessary harassment due to the ongoing agitation.