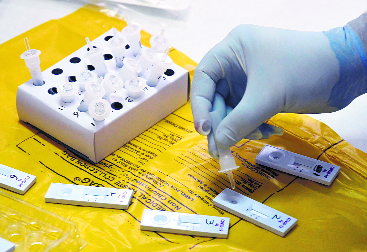 The major setback for the district in the Covid spread during the first phase has been late testing and patients coming to doctors at late stage. People belonging to rural areas are still hesitant in coming forward for testing, said Dr Bishav Mohan, senior cardiologist at the DMCH here and also member of the Covid-19 taskforce formed by state government.

“The only way to control the second wave expected in mid-December is to do maximum sampling, but the sampling figures tell an all together different story.”

Rumours that were spread in June-July affected the mindset of people. As a result, many did not came for testing. Had testing been done as we had planned, Covid would not have spread to this extent, said the doctor.

“The Sanjeevani group was formed and was a knowledge sharing platform where doctors from the entire country interacted with each other and also discussed the cases once a week. Communication was efficient and the only thing that we lacked was the will of the people to come out for testing,” he said.

Civil Surgeon Dr Rajesh Bagga said the need of the hour was to create awareness among the people to come up for testing. Information Education and Communication van was spreading awareness among the masses for testing and once again, the awareness drive will be started with the help of the IEC van. “For the past couple of days, the number of tests being done on a daily basis has seen an increase,” said Dr Bagga.