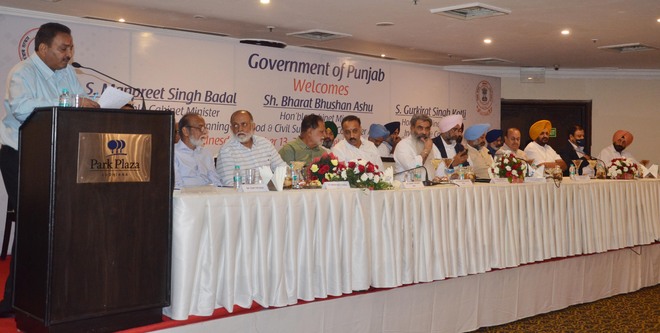 In a major reprieve to the business community, Finance and Taxation Planning Minister Manpreet Singh Badal on Wednesday announced that the state government would unveil a new scheme to settle all VAT-related assessment cases pending for the last few years, besides would bring a faceless system for taxpayers before Diwali this year.

Speaking to industry leaders of various associations of the Ludhiana in a local hotel, Manpreet Singh Badal, accompanied by Food and Civil Supplies Minister Bharat Bhushan Ashu and Industries and Commerce Minister Gurkirat Singh Kotli, said the scheme would be effectively rolled out to settle all pending assessments cases to benefit around 50,000 assesses.

Bharat Bhushan Ashu said the Ludhiana Municipal Corporation would spend Rs 15 crore and the Improvement Trust would give Rs 10 crore for the infrastructure development in the industrial areas/focal points.

Industries and Commerce Minister Gurkirat Singh Kotli announced to set up a new Focal Point in Khanna soon and said roadmap is already being prepared in this regard. Terming the industry backbone of Punjab, Kotli said a grant of Rs 20 crore would be issued for the infrastructure development of existing Focal Point in Ludhiana.

Chairmen of industrial boards not invited

About five local chairmen of various industrial boards were not invited during the function of the industry with the new Industry Minister Gurkiral Kotli, Manpreet Singh Badal and Bharat Bhushan Ashu

They not only felt ignored and shocked but also said the new government gave a wrong signal to the masses at the time of Assembly elections that party is divided.