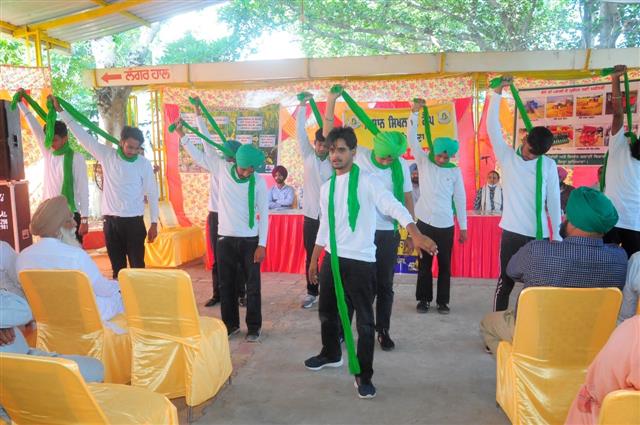 In a first-of-its-kind initiative in the state, the extension cell of Guru Nanak National College here has succeeded in bringing a sea change in the perception of the farming community in the past four years by controlling the menace of stubble burning and bringing 13, 671 acres under the crop residue management scheme with the active support of the Agriculture Department, Punjab, and the CII Foundation, New Delhi.

This sowing season, the cell worked in 30 villages and assisted 770 farmers with agri-machinery, focusing on small and marginal ones on a priority basis.

The cell has been actively working for the cause of the environment since 2018. In the current sowing season, the college worked in 12 adopted villages — Ghulal, Bijlipur, Neelon, Madpur, Lopon, Khattran, Balala, Mehdoodan, Khaira, Lal Kalan, Kubba and Chak.

The cell had chalked out a plan of spreading awareness among farmers regarding environment conservation and crop residue management in 2018. Besides organising rallies, nukkad nataks and extension lectures by experts in villages, it addressed the farmers’ demand for machinery. It provided demonstration on 204 acres with happy seeders in Sultanpur, Lopon, Mehdoodan and Khaira and additional three villages of Chak, Balala and Pangalian in 2018. In 2019, the college adopted 23 villages in the session 2019-20 and assisted the farmers with machinery on 1,115 acres. Till November 2020, it had brought 7,801 acres under in situ management of paddy straw.

Earlier, volunteers surveyed all 30 villages. They conducted nukkad nataks in collaboration with the Agricultural Department, Punjab. The cell identified the need for specific machinery by different farmers. The college cell also prepared a roster for the same and issued machines to the farmers on a daily basis, besides maintaining accountability as well. It was specifically looked into that the machinery is distributed equally among all, as per the need and time schedule.

President, Guru Nanak Managing Board, Roop Brar, and general secretary, Harpratap Brar, congratulated the extension team which was working at the ground level by involving students in the grand project of providing agri-machinery to farmers and checking the menace of stubble burning. The motive of spreading environment consciousness was being realised in the most appropriate manner by the students of the cell. Residue burning has drastically reduced in villages adopted by the cell,” said the general secretary.