Civic body fails to find an agency to carry out inspection 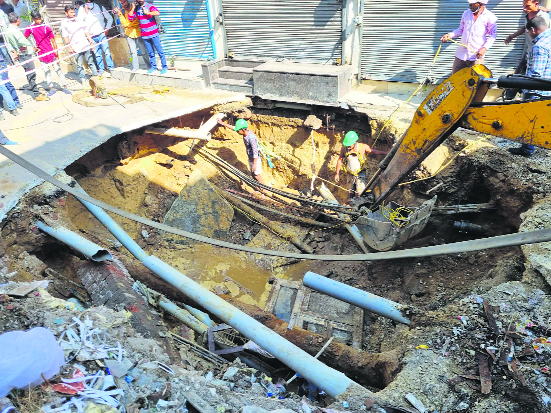 A portion of the road that collapsed in October 2021 at Deep Nagar in Ludhiana. file photo

Even after a spate of road cave-in incidents reported in the past, the Municipal Corporation (MC) is yet to conduct a survey to inspect old brick-lined sewer channels (also called ‘dat’ sewer) in the city.

A portion of such sewerage line broke down near the Punjabi Bagh area a few days back but any mishap was averted due to timely action by MC officials. A number of times the MC’s old brick sewerage system had broken down, resulting in major road cave-ins in the past.

In October 2021, two school students (siblings) riding a two-wheeler had fallen into deep crater as a portion of Deep Nagar Road had caved in. Both were rescued by local residents. The MC later found out that the old brick sewer line (dat) had got damaged at the incident site.

Following the Deep Nagar incident, the MC officials had stated that a survey would be conducted to check the old brick sewers in the city so that preventive measures be taken to avert such incidents. However, no such survey had been carried out in the city till date.

Notably, the then MC Commissioner in 2015 had also written to the Punjab Water Supply and Sewerage Board (PWSSB) for the inspection of old brick sewer lines to know the reason behind frequent road cave-ins. But, no such inspection was done even at that time.

A former councillor Inder Aggarwal said, “The city has witnessed big road cave-ins in different areas where old brick sewerage is available. The MC should take necessary steps to get the old sewers inspected so that timely steps be taken to prevent such incidents. The safety of the people should be ensured.”

An official of MC said they have not found any agency to carry out such an inspection of old sewerage lines in the city so far. The official further said that they were making efforts to explore methods, which can be used to scan the old sewerage lines.

In 2011, a man had died after the truck he was driving had fallen into caved-in portion near Kaka Marriage palace, Ludhiana. In 2013, 90-ft-long and 8-ft-deep crater had formed near Dhami Eye Hospital on the same road.