Apart from the Belagavi issue, other Maharashtra issues also taken up 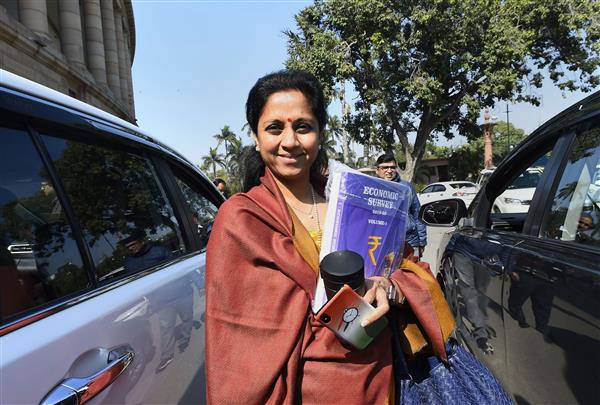 Amid simmering tensions along the border of Maharashtra and Karnataka over the Belagavi dispute, a delegation of Maha Vikas Aghadi (MVA) parties (Uddhav Thackeray-led Shiv Sena, NCP and Congress) led by NCP leader Supriya Sule on Friday called on Union Home Minister Amit Shah, asking him to intervene.

Apart from the Belagavi issue dating back to the implementation of the State Reorganisation Act, 1956, other matters related to Maharashtra were also discussed, sources said.

The situation is said to be tense and police personnel have been deployed in large numbers to prevent any untoward incident, according to reports. A heavy police cover continues in Belagavi—the city as well as the district—officials say.

Sule had also sought the intervention of Shah in the Lok Sabha on Wednesday. The people of Maharashtra are getting “beaten up” every day despite the BJP being in power in both the states, Sule told the House during Zero Hour, leading to protests from Karnataka BJP MPs.

“In the past 10 days, a conspiracy has been hatched to break Maharashtra. Home Minister Amit Shah should intervene,” she said, slamming Karnataka Chief Minister Basavaraj Bommai, and walking out of the House with NCP and Shiv Sena (UBT) MPs.

Shiv Sena (UBT) leader Sanjay Raut has also been demanding that Belagavi, a town in Karnataka, be declared a Union Territory. The incidents of violence in Belagavi cannot take place without Delhi’s support, he has been claiming.

Dating back to almost six decades, the issue flared up following some remarks by politicians from both states ahead of a Supreme Court hearing.

Parts of the Belagavi district are claimed by Maharashtra on linguistic grounds and Maharashtra Deputy Chief Minister Devendra Fadnavis was quoted as saying that “not a single Maharashtra village will go to Karnataka”.

“The state government will take the fight to get Marathi-speaking villages, including Belgaum-Karwar-Nipani, to our state,” Fadnavis said in response to Karnataka Chief Minister Basavaraj Bommai’s claims that panchayats in Maharashtra’s Jat tehsil had passed a resolution to merge with Karnataka.

Also, Shiv Sena leader Uddhav Thackeray questioned the "silence" of Maharashtra CM Eknath Shinde over the issue and said the Centre could not remain a mute spectator.

At the time of Independence, Belagavi (then Belgaum) was a part of the Bombay state which included parts of present-day Maharashtra and Karnataka.

After the States Reorganisation Act of 1956 redrew boundaries of States and UTs along linguistic lines, Maharashtra claimed that hundreds

of villages where the dominant language was Marathi were wrongly handed over to the Mysore state where Kannada was the main language.

Mysore was renamed Karnataka in 1973.