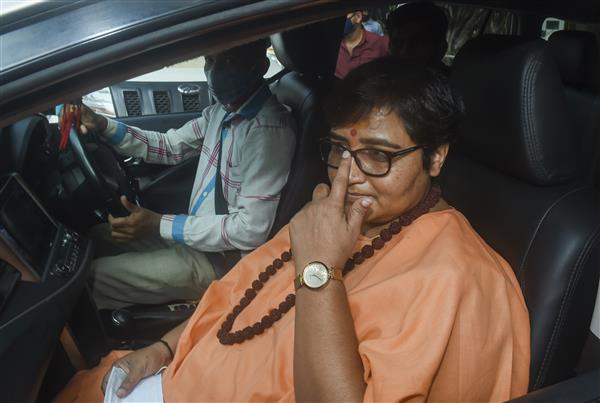 Thakur, out on bail, had last come to the court in January 2021.

Earlier in the day, her lawyers told special judge for NIA cases P R Sitre that as she was in Mumbai for medical treatment, she would attend the court.

She had not been summoned by the court.

The Bhopal MP arrived at 12.25 pm and sat on a lawyer’s chair in the front row.

A soft ‘mulmul’ cloth was placed on the chair by her aides before she took the seat.

The judge asked about her health, to which Thakur said, “Kabhi theek rehta hai, kabhi nahi (sometimes it is good, sometimes not).”

She has been taking treatment at the Kokilaben hospital in the city, and as the treatment suited her, she came for further treatment, the MP told the judge.

Asked about the nature of her illness  she said she was suffering for multiple ailments.

She will be staying in Mumbai for the next two days and if required get admitted to the hospital, Thakur added.

Judge Sitre then asked her to keep abreast of developments in the trial.

Videos showing the Bhopal MP taking part in ‘Garba’ dance during Navratri festival and also trying her hand at kabaddi, even though she has obtained bail on medical grounds, had come out in recent months, creating controversy.

During her earlier appearance, Thakur had complained about dirt and “lack of facilities” in the courtroom.

On Wednesday, she said:  “The present arrangement is good”. The judge said there were some restrictions due the coronavirus pandemic and cleaning is done better now.

The court then asked her to remain present whenever required, to which Thakur agreed.

Over 200 witnesses have been examined and eight of them have turned hostile during the trial so far.

No witnesses were examined on Wednesday. The next date of hearing is December 1.

Six people were killed and over 100 injured when an explosive device strapped to a motorcycle went off near a mosque in Malegaon, a communally sensitive town in north Maharashtra, on September 29, 2008.

According to Maharashtra police who conducted initial probe, the motorbike was registered in Thakur’s name which led to her arrest.

The case was later handed over to the National Investigation Agency.

The Bombay High Court granted bail to Thakur in 2017. — PTI