CAA based on ‘reasonable classification’ : The Tribune India

CAA based on ‘reasonable classification’ 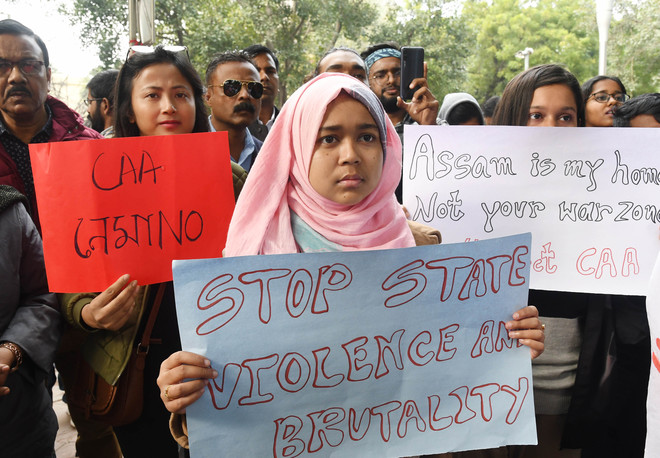 India is witnessing violent protests in Delhi, Kerala and northeastern states against the Citizenship (Amendment) Act with many media outlets and Opposition leaders describing it as a legislative measure that discriminates against Muslims in grant of citizenship.

Over a dozen petitions by various political leaders, activists and law students have been filed in the Supreme Court challenging its validity on the ground that it violates right to equality guaranteed to any person under Article 14 of the Indian Constitution.

Also, many northeastern states—particularly Assam—are opposing it for they fear that their ethnic identity, language and culture would be threatened by demographic imbalance as the region is already under tremendous pressure due to influx of migrants from Bangladesh.

The Citizenship Act, 1955, provides for acquisition of Indian citizenship by birth, descent, registration, naturalisation and by incorporation of territory into India. It also regulates registration of Overseas Citizen of India Cardholders and their rights. It prohibits illegal migrants i.e. those entering India without valid passport/travel documents or those who entered India with valid travel documents but overstayed from acquiring Indian citizenship.

It’s a matter of fact that the constitutions of Pakistan, Afghanistan and Bangladesh provide for a specific state religion i.e. Islam. As a result, people belonging to Hindu, Sikh, Buddhist, Jain, Parsi and Christian communities face persecution on grounds of religion in these theocratic countries.

They fear persecution in their day-to-day life where right to practise, profess and propagate their religion has been obstructed and restricted. Forcible conversion of minor Hindu, Sikh and Christian girls in Pakistan has been widely reported in the international media.

Many people belonging to the minority communities from these theocratic states have fled to India and continued to stay here even after the expiry of travel documents while some of them have incomplete or no documents, which made them illegal migrants ineligible to apply for Indian citizenship.

To address this problem, the amendment relaxes the norm to make these victims of religious persecution eligible for applying for Indian citizenship. It says Hindus, Sikhs, Buddhists, Jains, Parsis and Christians from Pakistan, Bangladesh and Afghanistan, who entered India on or before December 31, 2014, would not be treated as illegal migrants. It relaxes the conditions for them to acquire Indian citizenship by amending the Third Schedule to the Act to make them eligible for citizenship by naturalisation in five years, instead of 11 years.

The entire controversy is about excluding Muslims from Pakistan, Afghanistan and Bangladesh from the ambit of the CAA in grant of citizenship by naturalisation. Those opposed to it allege that it violates the right to equality and equal protection of law guaranteed under Article 14.

Second, various ethnic groups in northeastern states have started agitation against it. A parliamentary committee which examined the amendment had pointed out that it may be in conflict with the Assam Accord signed between agitating student leaders of the state and the Centre in 1985 to protect the social, cultural, and linguistic identity of the Assamese people.

According to the Assam accord, foreigners who entered the state from Bangladesh after March 25, 1971, will be detected and expelled. Over 19.06 lakh residents of Assam failed to make it the National Register of Citizens (NRC). But the CAA would make most of them legal migrants eligible to get citizenship by naturalisation.

The real issue is about withstanding the judicial scrutiny of Article 14 which says, “The State shall not deny to any person equality before the law or the equal protection of the laws within the territory of India.”

Can the classification of persecuted minorities in the three neighbouring theocratic countries be termed as “reasonable classification”? Is it based on “intelligible differentia”? And finally, does it have a rational relation with the object of protecting these persecuted minority groups from the three Islamic countries? The Supreme Court will examine these issues. But on the face of it, the answer is in the affirmative.

To address the concerns regarding its impact on identity, language, culture of ethnic groups in northeastern states, the amendment declares that “Nothing in this section shall apply to tribal area of Assam, Meghalaya, Mizoram or Tripura, as included in the Sixth Schedule to the Constitution, and the area covered under “The Inner Line” notified under the Bengal Eastern Frontier Regulation, 1873.” But it has failed to address their concerns. The government needs to talk to them.

This problem is a legacy of partition. The exclusion of those belonging to majority community in Pakistan, Bangladesh and Afghanistan from the proposed relaxation has to be seen in historical perspective. It’s India’s civilisational responsibility. Article 1 of the Constitution recognises that civilisational entity when it talks about India i.e. “Bharat”.

India has been the natural abode for persecuted people for centuries. Be it Parsis from Iran or Budhdhists from Tibet—they all were welcomed. It doesn’t discriminate against Muslims. Since Muslims can’t claim to be victims of religious persecution in Pakistan, Bangladesh and Afghanistan, they stand excluded from the relaxation offered under the CAA. They can apply under the normal route. It can’t be anybody’s case that all illegal migrants should be given relaxation in grant of citizenship. It’s an irony that members of Muslim minority in India are opposing a relaxation given to their counterparts from neighbouring countries. The violence against CAA must stop.

Meant for victims of religious persecution