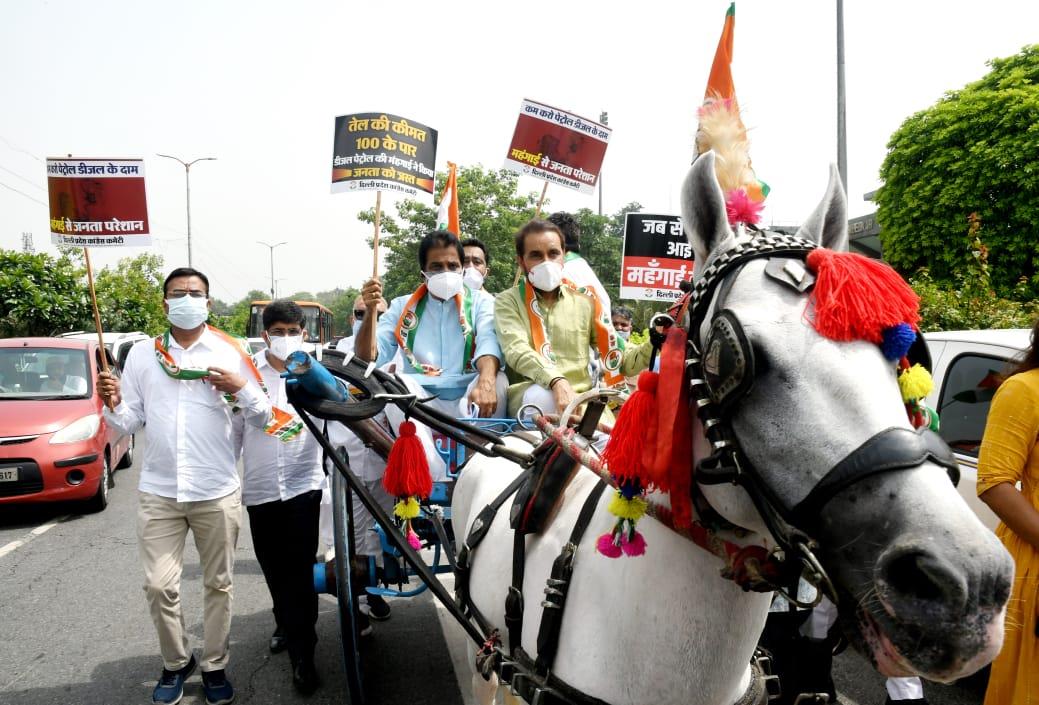 Congress General Secretary KC Venugopal along with party leaders and workers rode a horse-cart during a protest against the fuel price hike in front of a petrol pump in New Delhi on Monday.

The Congress held symbolic protests at petrol pumps across Punjab and Haryana on Friday against the rise in fuel prices, and demanded an immediate rollback of the hikes.

Congress workers held placards as they raised slogans during the demonstration against the fuel price hike.

Petrol prices have been hovering over Rs 100 a litre for the past few couple of months now.

Venugopal said that under the UPA government, the tax on petrol and diesel stood at Rs 9.20. Now, it is Rs 32.

“The government should stop imposing excise duty on petrol and diesel. It should come under the purview of Goods and Services Tax. We demand a complete rollback of fuel price hike,” Venugopal, who is the Congress general secretary, said.

Party leaders said protests are being held at petrol pumps across the county by local units in compliance with Covid-19 protocols.

Besides the steep hikes in rates of diesel and petrol, prices of other commodities of daily use like cooking oil and gas have also registered a manifold increase, senior leaders of the party said.

In Amritsar, some protesters set fire to an old car, saying they wanted to send a message to the Centre that common people are unable to afford vehicles because of the high cost of fuel.

The party's workers staged a street play in Panchkula to highlight the plight of the common people as a result of the rise in prices of fuel and other essential commodities.

Some even rode bullock carts and horse carts as a mark of protest.

Surjewala said prices of diesel and petrol are being increased at a time when the people of the country are battling the pandemic.

He said the sharp rise in fuel prices has adversely hit various sections, including the farmers.

She said the BJP-led government was “insensitive” to the plight of the common people and was putting more burden on them when they were already going through a difficult time.

Leading a protest in Kurali, Punjab Congress president Sunil Jakhar said, “The arrogant government at the Centre has constantly been increasing fuel prices instead of providing relief to the people during the current crisis."

"During the Congress-led UPA regime, despite international crude oil prices being very high, diesel prices hovered around Rs 50, which is now near Rs 90 per litre, while petrol is touching Rs 100 per litre", he said.

"Despite international crude oil prices being high, the government led by Dr Manmohan Singh did not allow the burden to be passed on to the people, but just the opposite is happening under the Modi regime," Jakhar added.

Punjab Congress leader Raj Kumar Verka said the steep rise in prices of petrol and diesel has broken the backs of the common people amid the COVID-19 pandemic. —with PTI