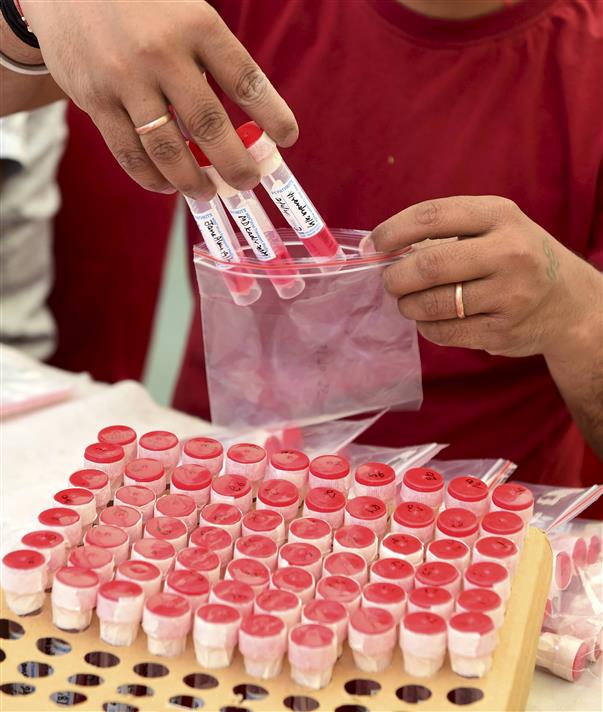 A health worker organises samples from passengers for COVID-19 test, amid coronavirus pandemic, in New Delhi on Friday. PTI photo

The ban imposed on undergoing foreign training programmes by Indian government officials following the outbreak of the COVID-19 pandemic last year has now been extended indefinitely.

“All Cadre Controlling Authorities (CCAs) and Central Training Institutes (CTls) are informed that no Foreign Training shall be conducted until further orders,” directives issued by the Department of Personnel and Training on April 1 state.

The directives, however, add that under exceptional circumstances, if it is felt necessary to conduct any foreign training, prior approval of the department needs to be obtained.

In June 2020, the central government had ordered that due to the outbreak of COVID-19 pandemic and keeping in view the consequent safety measures, no foreign training shall be conducted during the 2020-21 financial year except under exceptional circumstances.

Government officials from different services and cadres, including the IAS, IPS, IFS and IA&AS, are sent for mid-career training programmes to various foreign administration and management institutions to the United States, Europe, Japan, New Zealand and Australia, including universities like Harvard and Cambridge.

According to reports, about 300 officials had attended overseas training programmes of various durations in 2029-20, for which the government had incurred a cost of over Rs 50 crore.

In addition to civilian employees, the Armed Forces too send their officers to military institutes of friendly foreign countries on a reciprocal basis for training in higher command and staff duties and defence studies, for which there is a different procedure.

There weer also reports that last year, the central government was considered to cut down on the foreign training of civilian employees under the Domestic Funding of Foreign Training (DFFT) policy due to rising costs. One of the options suggested was that instead of physically travelling abroad, online programmes could be explored as these are now become technically viable.