How a BSF patrol thwarted ambush along Line of Control and killed three terrorists : The Tribune India

While Sub-Inspector Guite has been posthumously decorated with Kirti Chakra, other members of the ambush party have been awarded the Police Medal for Gallantry 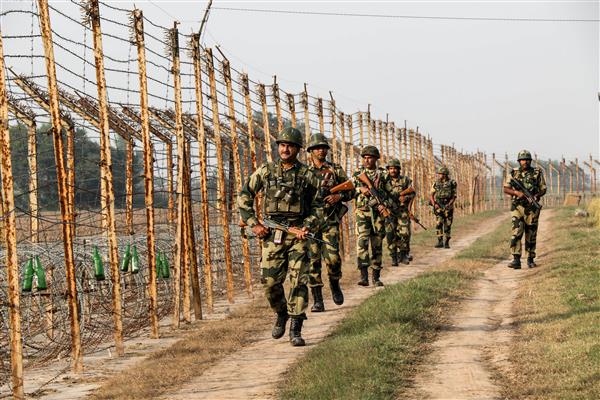 Gallantry awards for six Border Security Force (BSF) personnel announced on the eve of Republic Day – 2023 show how a BSF commando patrol thwarted an ambush along the Line of Control (LoC) and killed three terrorists.

A company from BSF’s 59th Battalion is deployed on the Bump Complex in Poonch Sector under the operational control of the Army’s 120 Infantry Brigade. On November 30, 2020, a 24-hour special ambush party led by Sub-Inspector Paotinsat Guite, was deployed along an anticipated terrorist ingress route in the highly sensitive Damaikush Bowl, where operational linking activity was underway.

On December 1, around 8.35 am, the Ghatak team was fired upon from close proximity from the direction of Damaikush Nullah on the Pakistani side. Since Sub-Inspector Guite was familiar with the terrain and enemy tactics, he took control of the situation, re-sited the ambush and coordinated effective, swift and aggressive retaliatory fire towards the terrorist group despite the tough terrain with undulating ground, thick vegetation and mines.

During the exchange of fire, a terrorist hit Guite on the left armpit and the bullet exited from the back of his right shoulder, tearing the strip of bullet proof Jacket. “Despite being injured, Guite exhibited indomitable courage, lightning and bold action and fired upon the terrorist till he fell down unconscious. The immediate retaliation by Guite was imitated by his ambush party and resultantly, the evil designs of hardcore militant’s possible attempt to target the Ops link in the Bump complex was averted,” the citation for the awards states.

Simultaneously, nearby Pakistani posts, Mohra OP and Left OP, started firing on Indian posts to facilitate extrication of the terrorists engaged with the BSF ambush party. The fire coming from Pakistani posts was promptly and aggressively retaliated by Indian posts.

Amid heavy firing by the enemy posts and terrorists, the BSF ambush party evacuated injured Guite, who later died, to a post (FDL-3) located on a high gradient ridge through a narrow Infantry Safe Lane (ISL).

During this close quarter gunbattle with terrorists, three Hizbul Mujahideen terrorists, identified as Abu Bilal from Murre, Nasir Javed from Kotli and Javed Bhai from Mirpur, were killed.

While Sub-Inspector Guite has been posthumously decorated with the Kirti Chakra, the second highest peacetime gallantry award, for leadership and courage displayed by him, the other members of the ambush party have been awarded the Police Medal for Gallantry.