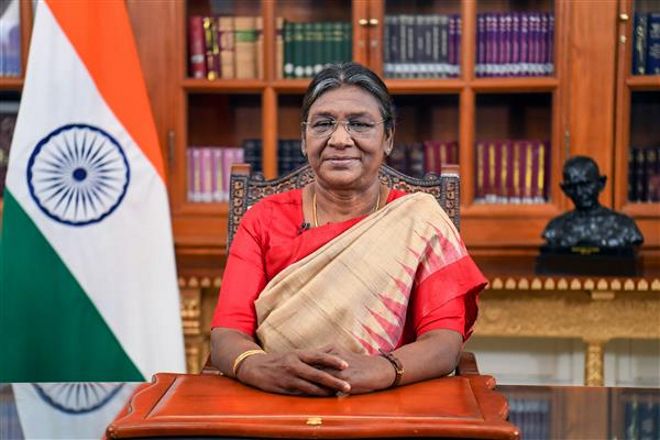 The world is looking at India with a new sense of respect and every citizen has a reason to be proud of the nation’s growth story, President Droupadi Murmu said on Wednesday, delivering her first Republic Day eve address after assuming office in 2022.

Hailing India’s transformation from a “poor and illiterate nation to a confident nation marching on the world stage”, Murmu credited the Constitution makers for the “unprecedented national journey”, lauding India’s G20 presidency as “an opportunity to promote democracy and multilateralism and equitable and sustainable world order”.

G20 is an ideal platform to discuss and find solutions to global warming and climate change, which affect the poor most. —Droupadi Murmu, President

The President described growth on the economic front, despite Covid, as the “most encouraging in the national mission of Sarvoday”. She said most sectors had shaken off the pandemic effect, with food security for the poor ensured despite Covid-induced disruptions and yet India managing to remain the fastest growing among major economies.

Murmu said women would do the most to shape India’s future and spoke of the lessons in ecological conservation and social cohesiveness the tribals had to offer.

She said there was no cause to panic amid Covid, but advised citizens not to let their guard down. Terming India’s growth across sectors as encouraging, she said that much remained to be done to realise Mahatma Gandhi’s ideal of ‘Sarvodaya’.

India’s global prowess featured prominently in the President’s address to the nation. “As a result of a series of initiatives in recent years to transform all aspects of governance and unleash creative energies of people, the world has started to look at India with a new sense of respect. Our interventions in various world forums have started making a positive difference. This respect brought new opportunities and responsibilities,” she said.

Flagging India’s G-20 presidency, the President termed global warming as a top challenge before the group and stressed that “at the global level, emerging economies would need a helping hand from advanced nations in the form of technology transfer and financial support”.

Advocating balance between development and environment, the President urged citizens to turn to millets as a food option since it consumed less water and was more eco-friendly. Celebrating India’s journey, the President said, “We have succeeded as a democratic republic because so many creeds and so many languages have not divided us, they have only united us. That is the essence of India.”

She also prophesied that women, half of India’s population, would do the most to shape tomorrow’s India. “What miracles cannot be achieved if this half of the population is encouraged to contribute to nation-building to the best of their ability?” asked the President, extending her greetings to the people.