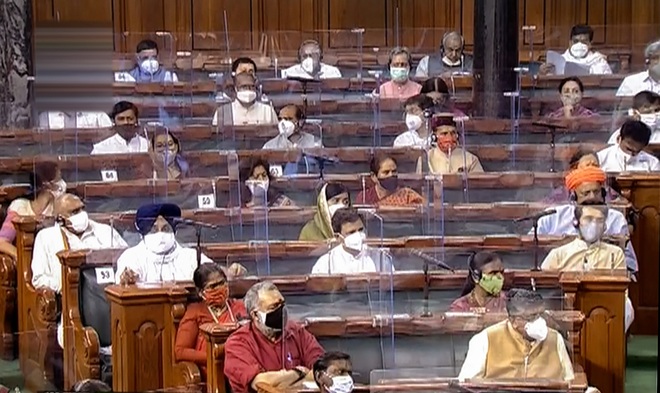 Parliamentarians attend the monsoon session amid the pandemic in New Delhi on Tuesday. PTI

There was no hubbub rising to the media gallery from the bowels of the Rajya Sabha today when it reconvened for the first time after the Covid pandemic ravaged the world.

Members were split between the Lok Sabha and the Rajya Sabha with some of them even consigned to the visitor’s galleries next to the media gallery. The scattered and widely dispersed seating arrangement meant a loss of collective voice, either to yell aye in approval or raise the decibel level several notches in protest.

As the House assembled, the difference was in two large LED screens behind Chairman Venkaiah Naidu which captured the action in the Lok Sabha and various Rajya Sabha galleries. And the small number of MPs in the House seemed to give it an air of a somnolent debate in the middle of a lengthy session rather than reflective of the energy on the first day of Parliament when many political scores have to be settled.

Special Mentions saw Naidu keeping a strict vigil while members’ names were called out. He repeatedly noted the changes brought about by the pandemic.

Some MPs utilised the opportunity to saunter over to the Lok Sabha chamber to have a feel of the place as during normal sessions, they would not have been allowed to enter the Lok Sabha. After the Special Mentions closed and papers were laid on the table of the House, Deputy Chairman Harivansh, firmly masked, stood at a more-than-usual distance waiting for Naidu to vacate the Chair. As the transition was taking place, a marshal moved in swiftly to spray sanitiser on the vacant chair. But MPs were unhappy. “Many elements of a democratic system are missing,” said one.