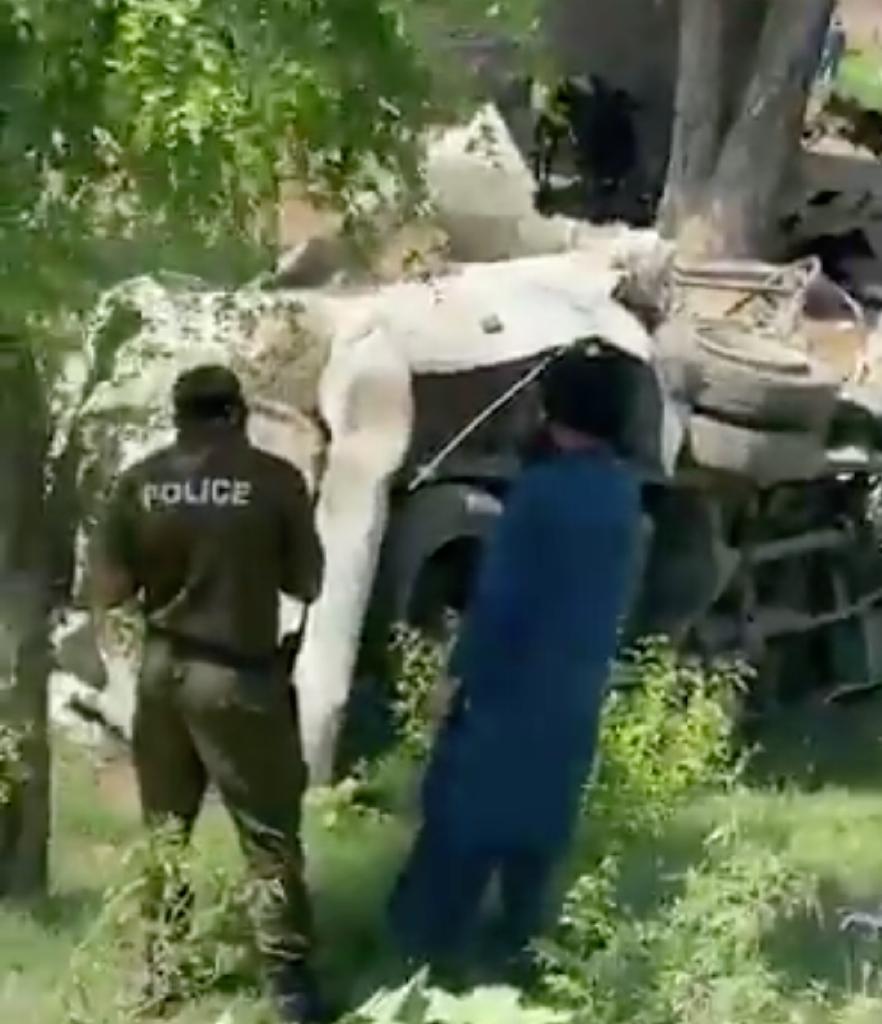 The police and ETPB confirmed that the dead included 19 Sikhs who belonged to Peshawar. Source: Sirsa/Twitter.

At least 21 Pakistani Sikh pilgrims returning from Nankana Sahib were killed on Friday when the driver of the mini-bus they were travelling in reportedly tried to take a shortcut to avoid a railway crossing and rammed the vehicle into a passenger train in the country’s Punjab province, officials said.

According to the Evacuee Trust Property Board (ETPB), which looks after the minority affairs, said that 22 people, including 21 Sikhs—11 men, nine women and a child from Peshawar—lost their lives in the fatal coach-train collision in Shjiekhupura. A Muslim man has also been killed in the incident.

The mini-bus carrying around 26 Sikh pilgrims, all from Peshawar, hit the Lahore-bound Shah Hussain Express which was coming from Karachi at a crossing near Sheikhupura district around 1.30 pm, the police said.

According to the rescue officials, at least five people were injured in the accident, all of whom were shifted to District Headquarters Hospital, Sheikhupura, Dawn newspaper reported.

"They had come to Nankana Sahib from Peshawar. After staying in Nanakana Sahib, they were leaving for Peshawar. The ETPB security had escorted them till the limits of Nankana Sahib," he said.

The gate at the crossing was closed and the driver apparently tried to take a shortcut instead of waiting for the gate to open, senior police officer Ghazi Salahuddin told reporters at the crash site.

“They had come to Nankana Sahib from Peshawar. After staying in Nanakana Sahib, they were leaving for Peshawar. The ETPB security had escorted them till the limits of Nankana Sahib,” he said.

The police have denied reports that the level crossing was unmanned.

Pakistan Railways Chief Executive Officer Dost Ali Laghari has set up a committee comprising three senior officers to investigate the incident. It will present its initial report by Saturday “so that it can be determined which side was at fault”.

“Action will be taken in accordance with the law against whomever is held responsible for this accident,” the railways said, adding that a divisional engineer has been suspended from service and an inquiry launched.

Deeply saddened at the accident this afternoon at a railway crossing near Sheikhupura which resulted in the death of atleast 20 people, mainly Sikh pilgrims returning from Nankana Sahib. Have directed that proper medical care be provided to the injured.

Railways Minister Sheikh Rashid has ordered authorities to take immediate action against those responsible for the accident.

Prime Minister Imran Khan expressed grief over the accident and directed authorities to provide the best medical aid to the injured.

“My condolences and prayers go to the families of the deceased. [I] have directed relevant authorities to ensure facilitation and care for all the families,” he said.

The premier announced that the Railways’ “operational safety SOPs will be reviewed immediately”.

Punjab Chief Minister Usman Buzdar expressed sorrow at the loss of lives and conveyed condolences to the families of the deceased.

According to a statement, the Chief Minister directed the health department to provide all facilities possible to the injured.

Opposition Pakistan Muslim League-Nawaz president Shehbaz Sharif said the news of the Sikh pilgrims’ death in the accident was “saddening”.

“I extend my most sincere sympathies to the bereaved families on their irreparable loss,” a tweet by his office quoted Sharif as saying.

Friday’s accident comes after a series of recent fatal railway accidents in Pakistan.

Over 70 people died when a Karachi-Rawalpindi train caught fire during its journey in November last year. PTI

They met with an accident near Farooqabad Rly station
We stand in solidarity with their families🙏🏻@ANI pic.twitter.com/K7u9oPrN7V