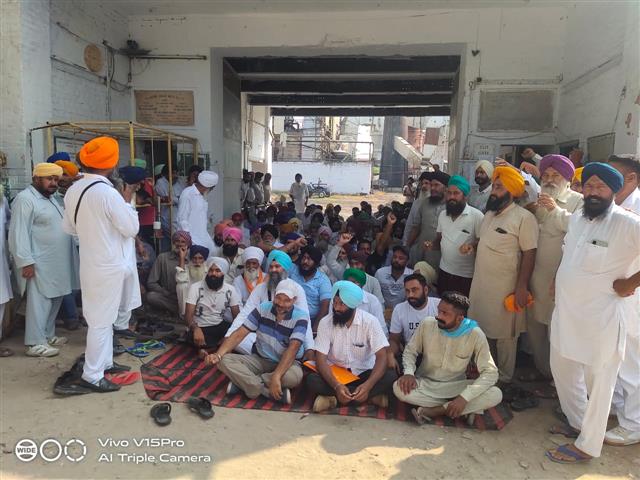 Farmers protest outside the sugar mill on Tuesday. Tribune Photo

After the administration failed to conduct auction of the Dhuri sugar mill for the second time, two sugarcane growers have started fast unto death on the mill premises. The administration has now fixed October 10 as the next date of auction to recover the money from the mill, but growers are demanding quick payment.

“Officers are not serious and they are trying to scuttle our protest by only announcing the dates of auction. Today we waited all day for any action, but officers failed to deliver. I along with another grower have started fast unto death,” said Harjeet Singh Bugra, chairman of the Sugarcane Growers Struggle Committee.

Some sources said some bidders have shown interest to buy the demarcated 12 acres of mill, but they have sought time to verify the documents of the mill. Since bidders sought time, none offered any bid today to buy the land of the mill.

Today the administration has finalised third date for auction. But growers have no expectations and they have announced to continue their protest, started on September 14 at the gate of the mill and fast unto death if authorities failed to release their payment.

Dhuri SDM Amit Gupta confirmed that they have fixed October 10 as the next date for auction of mill property to recover the dues of growers. “Some bidders have shown interest, but they have sought time to verify the documents of the mill. We are trying best to conduct the auction at the earliest,” added Gupta.