Land record ‘must’ for wheat purchase 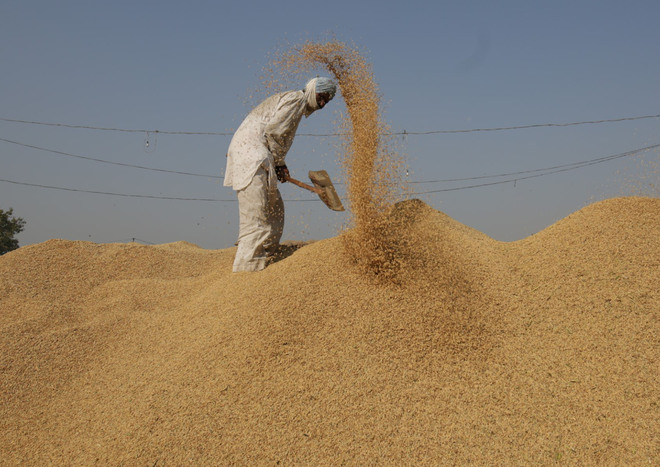 The Food Corporation of India (FCI) has said it will go in for direct payment into farmers’ bank accounts for the wheat crop arriving in mandis next month.

So far, the payment was credited to commission agents (arhtiyas), who further transferred it to the accounts of farmers. This year, the FCI will procure 130 lakh metric tonnes of wheat, for which it will pay over Rs 24,000 crore to farmers.

However, it has made it mandatory for farmers to furnish their land record for this procurement season. A letter to this effect was sent by the FCI to the Department of Food and Supplies, Punjab, today.

Though the rationale behind demanding details of land records is to account for each grain procured by the Centre and ensure no wheat from outside the state is purchased on the minimum support price (MSP), farmers and arhtiyas say it is not feasible for a state like Punjab, as almost 40% of the land has been leased out by owners to other farmers.

They maintain this is another assault on the state, which is leading the charge in the protest against the Centre on the three farm laws.

Talking to The Tribune, Vijay Kalra, vice-chairman, Federation of Arhtiya Association of Punjab, said the Centre’s move was aimed at punishing the state farmers and arhtiyas for the agitation on the Delhi border against the laws.

“No one in Punjab will upload details of land ownership. More than 40% of land, including that owned by NRIs, has been leased out. This means, the landowner not tilling the land, but declaring its ownership will get the MSP, not the cultivator. We have no option but to go on a strike in mandis from April 1. When the procurement season starts, there will be no labour to lift the grains and no arhtiyas to help in procurement,” he said. — TNS