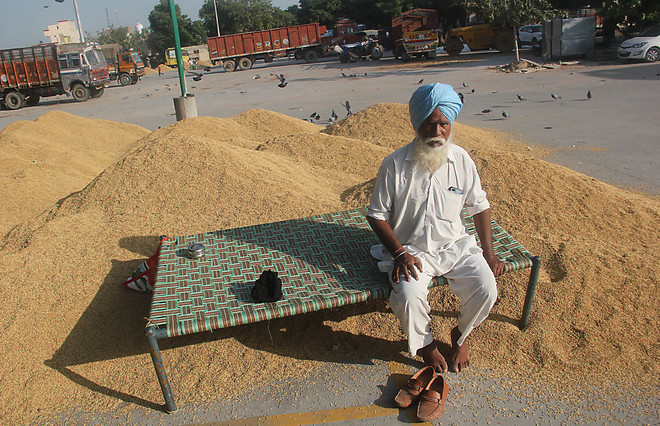 A farmer with his produce at a grain market in Bathinda. Tribune photo

The early variety of basmati — PUSA 1509 — has started arriving at the grain markets in the Malwa region, but farmers are disappointed as they are fetching low price for their produce, even lower than last year. In 2019, the same variety fetched Rs 2,400 and more per quintal, whereas this year it has touched as low as Rs 1,700 per quintal.

The opening price for basmati’s early variety has led to worries among farmers who grow late basmati variety, PUSA 1121 and PUSA 1718, which last year fetched Rs 2,500 to 3,200 per quintals, respectively. Both these are much superior varieties and come in the market in October.

The basmati is not covered under the assured procurement system as wheat and paddy. Therefore, the prices are governed by the market dynamics. Farmers cannot earn much as they have to sell basmati immediately in mandis to private players like exporters and big arhtiyas after harvesting and they only get what is the prevailing rate at that time. A similar trend has been witnessed at the mandis of Jalalabad and Fazilka.

Jagsir Singh, a farmer from Muazzam village in Fazilka, said, “I brought 50 quintals of PUSA-1509 and got Rs 1,950 per quintal, which is less than last year.”

Shingara Singh Mann, secretary, BKU (Ekta Ugrahan), said, “Basmati varieties PUSA 1509 and 1121 were available from Rs 2,500 to Rs 3,200 last year. This year the government encouraged us to cultivate basmati as it saves water. We also increased the area under its cultivation. However, the government has failed to ensure a fair price for our yield.”