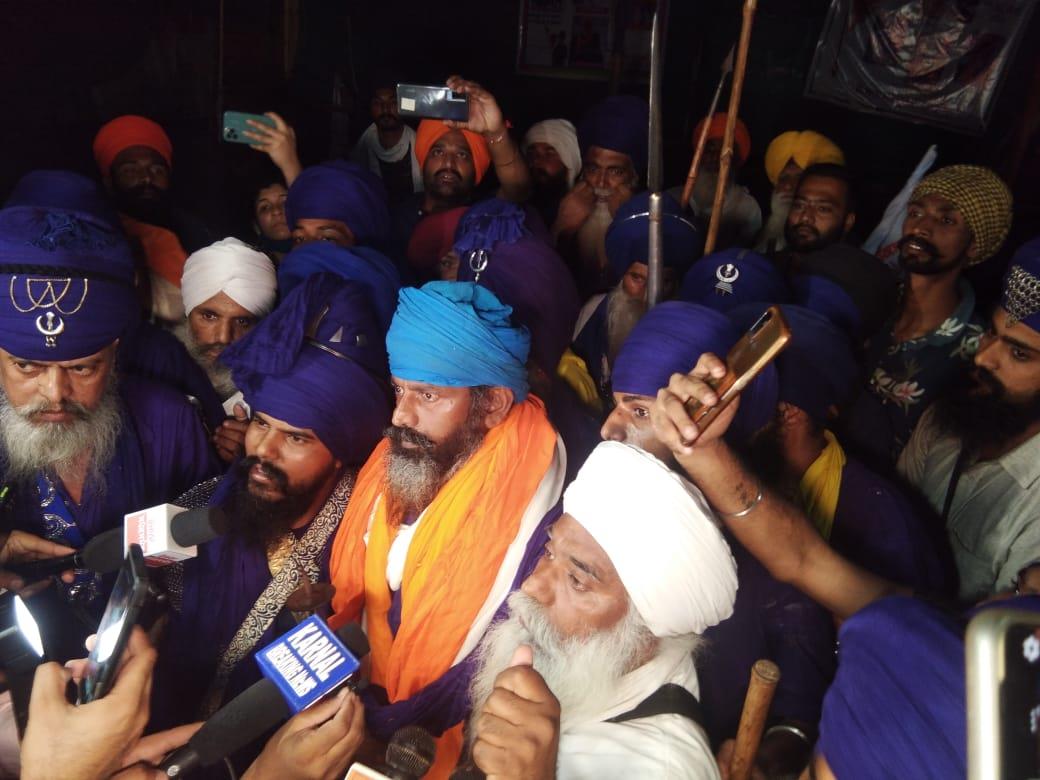 A Nihang, Sarvjeet, has been arrested after he surrendered before the police. Tribune photo

A semi-naked mutilated body of a man with his left hand and foot chopped off was found hanging from an overturned police barricade near the main stage of the Samyukt Kisan Morcha (SKM) at Singhu border on Friday morning.

The deceased has been identified as Lakhbeer Singh (35), a labourer from Cheema Khurd village in Tarn Taran (Punjab). A Nihang, Sarvjeet, has been arrested after he surrendered before the police.

In a purported video clip that has gone viral on social media, a few Nihangs are seen standing around the injured man with his severed hand tied close to his head. The group is heard accusing him of desecrating a Sikh holy book and asking him who sent him to “commit the sacrilege”.

Police sources said the assailants dragged the man for a few metres before tying him with ropes to the barricade. He is said to have bled to death. Some injury marks were also seen on his neck and chest.

In another video, a few people are seen at the spot and the man lying in a pool of blood on the ground, his eyes glazed over in shock and pain. They are purportedly heard asking him his name and other details. Hundreds of protesting farmers gathered at the spot and were seen making videos of the deceased hanging from the barricade.

In yet another video, a group of Nihangs is purportedly heard taking responsibility for the crime, claiming, “He (deceased) disrespected the holy book. Why shouldn’t he be punished?”

The police are learnt to have been informed about the incident around 5.30 am. When Kundli SHO Inspector Ravi Kumar reached the spot, the protesters reportedly didn’t allow the police team to take away the body. It was after over four hours of persuasion and when farmer union leaders, including Baldev Singh Sirsa, arrived at the spot that the body was sent to the General Hospital’s mortuary.

The ADGP said a murder case had been registered against unidentified persons and a forensic team had visited the spot. “We have evidence and a few suspects are on our radar,” he said.

The SKM has condemned the killing and distanced itself from the incident. At a press conference, the SKM leaders said both the Nihang group and the deceased had nothing to do with the morcha. It demanded that the culprits be punished in accordance with law after investigating the allegation of murder and conspiracy behind sacrilege.