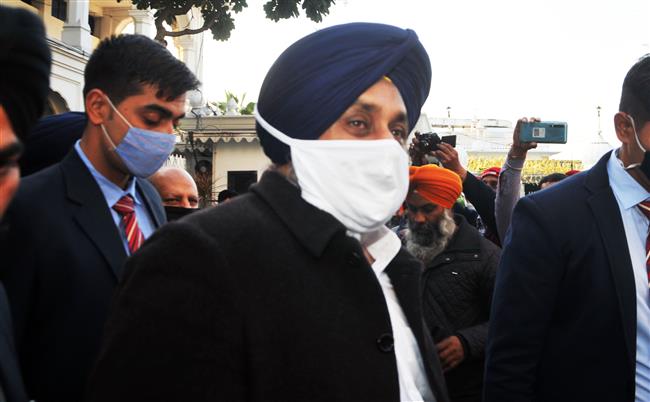 SAD president Sukhbir Badal before a meeting with SGPC members and SAD leaders in Amritsar on Thursday. Photo: Vishal Kumar

On the eve of electing the new president of the SGPC and other office-bearers for the next one-year term, the members owing allegiance to the SAD entrusted all rights to party president Sukhbir Singh Badal to take a final call on electing the new head of the Sikh body, during a closed-door session at Teja Singh Samundri Hall, here on Thursday.

At present, the house consisted of 166 members in addition to 15 co-opted members, five Takht Jathedars and the Golden Temple head granthi. Nearly 17 members have died, while the two had resigned from the membership.

If the SGPC general elections are conducted next year as was being speculated, this will be the last presidential polls of the current tenure of the general house.

Going by experience, nothing could be speculated on the possible candidates. Sources revealed that even indirect lobbying for this post has no place and whosoever’s name is announced in the house would be endorsed by the majority of members.

However, all eyes are set on whether SGPC’s existing president Gobind Singh Longowal, who completed his hat-trick by leading the command in 2017, 2018 and 2019, would be repeated or vacate the chair for some more ‘flexible’ candidate who could run the SGPC’s affairs, besides help garnering political gains for the party.

Hailing from Sangrur, Longowal is still a frontrunner in the race among the probable to hold the reins of the Sikh body. He had served his term successfully by toeing the party line by criticising Congress and BJP, after alliance with SAD was broken, on number of occasions politically.

However, lately he faced flak over mishandling the issue of 328 missing ‘saroops’ of Guru Granth Sahib which still refused to die down. The protest by other Sikh outfits leading to group clashes inside the Golden Temple complex was highly criticised.