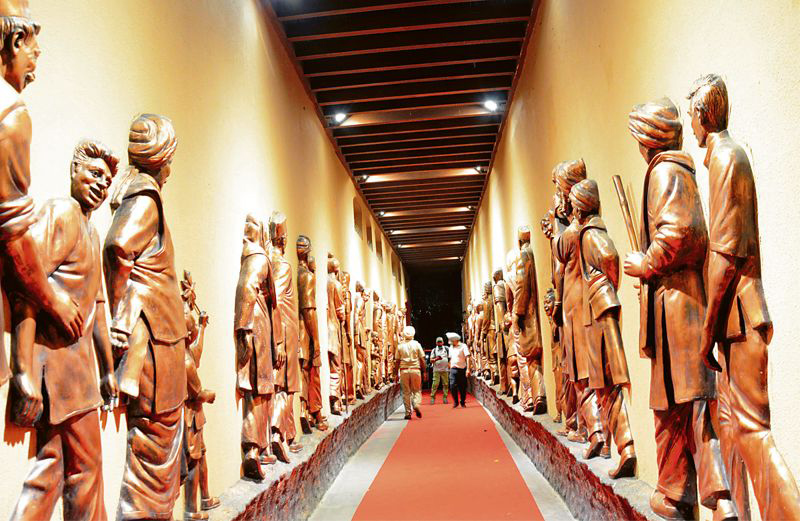 A team of experts will soon visit Jallianwala Bagh to inspect the “lapses” that have been pointed out after it was given a facelift. This was stated in a letter written by Govind Mohan, Secretary, Ministry of Culture, to former MP and member of Jallianwala Bagh National Memorial Trust Tarlochan Singh.

According to the Secretary, the spelling mistakes in Punjabi language and Gurmukhi script, pointed out by INTACH, were rectified. Similarly, the issue of visitors throwing coins in the Martyrs’ Well too was addressed by putting up a wooden shield over the see-through glass on its sides and steel railings were placed to guard the plaques on the important spots on the pathway. He has assured that once the site visit is done, the executing agency will address the remaining lapses too.

Nonetheless, objections were also raised over the large-sized metal murals of imaginary human figures, which reportedly did not resemble the Punjabi population in 1919. It depicts middle-aged Sikh men wearing ‘patkas’ and children sporting ‘spiked hair’.

Tarlochan further said, “I have suggested the Culture Ministry that we should keep the original look of the street as it was in 1919. This will maintain the original ambience and sprit of the memorial. I have also suggested that the experts must have a meeting with INTACH officials. Similarly, I have asked to remove the ticket-vending machines from the site as it gives an impression that paid entry can be implemented, whereas it was never on the agenda of the Trust.”

“Also, a wall panel or a board should have been put up mentioning the detail of those who died on April 13, 1919. At the museum, the “Sufferers’ Accounts” too should be revised,” he said.

After the work of the first phase was executed, it was virtually inaugurated by Prime Minister Narendra Modi, who is also the Trust chairperson, on August 28, 2021.