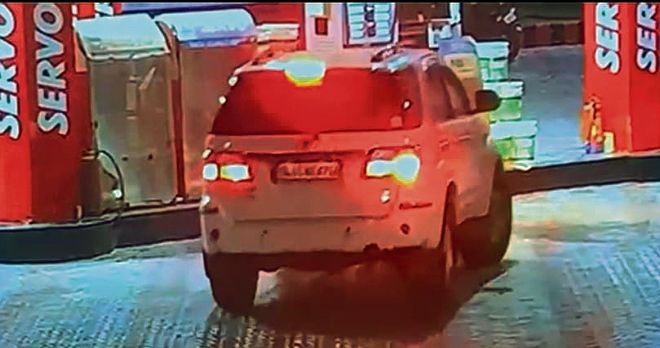 Fortuner at a Bathinda fuel station.

Interrogation of Ludhiana-based transporter Baldev Chaudhary, alias Ballu, nabbed recently by the police with illegal arms, has revealed he had handed over arms to some criminals in Bathinda on the directions of Canada-based gangster Goldy Brar, who took responsibility for Sidhu Moosewala’s killing.

The weapons are said to have been used in the singer’s killing. The Ludhiana police are trying to verify Baldev’s role. Baldev is a close aide and college mate of gangster Lawrence Bishnoi. The delivery took place 10 days prior to the singer’s killing on May 29.

We are connecting the dots. If Baldev is involved in supply of arms used in the killing, action will be initiated against him accordingly” — Dr Kaustubh Sharma, Police commissioner, Ludhiana

“Just 10 days before the killing, Brar had called up Baldev and asked him to reach Jagraon to receive illegal firearms. At Jagraon, some occupants of an Alto car handed him over a bag containing two weapons and over 50 cartridges,” said a senior police official. Baldev again got a call from Brar, who asked him to reach Bathinda, where he later handed over a bag containing arms to the occupants of a Toyota Fortuner near a petrol station.

“Teams of the Ludhiana police have been conducting raids in Bathinda, Delhi and other places to track down the Fortuner occupants. We traced the owner by procuring record from the Transport Department, but the individual from Delhi claimed he had already sold it to a buyer from Punjab. The buyer seemed to have not transferred the vehicle’s record to his name,” said the senior official.