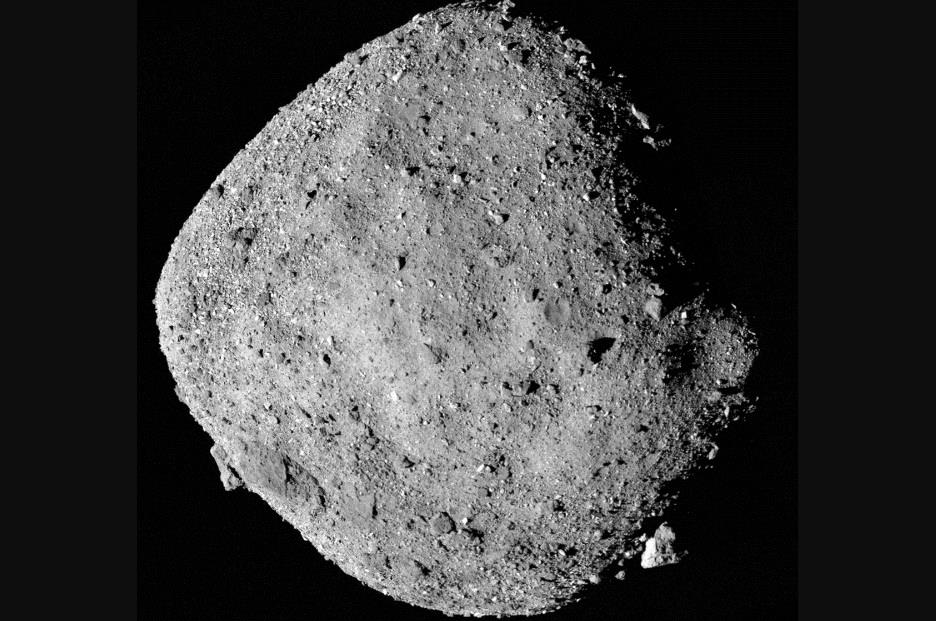 Bennu is a primordial artifact preserved in the vacuum of space, orbiting among planets and moons and asteroids and comets. (NASA)

As a NASA spacecraft gets ready for the historic moment to grab a sample from asteroid Bennu's surface on October 20, this pristine remnant from the early days of our Solar System offers more than what meets the eye.

NASA's first mission to return a sample from an ancient asteroid -- the Origins, Spectral Interpretation, Resource Identification, Security-Regolith Explorer, or OSIRIS-Rex -- is a seven-year long voyage set to conclude upon the delivery to Earth of at least 60 grams and, possibly, up to almost 2 kgs of sample.

It promises to be the largest amount of extraterrestrial material brought back from space since the Apollo era.

Bennu is classified as a B-type asteroid, which means it contains a lot of carbon in and along with its various minerals, NASA said in a statement.

Bennu is a carbonaceous asteroid that hasn't undergone drastic, composition-altering change, meaning that on and below its deeper-than-pitch-black surface are chemicals and rocks from the birth of the solar system.

Not only is it conveniently close and carbonaceous, it is also so primitive that scientists calculated it formed in the first 10 million years of our solar system's history - over 4.5 billion years ago.

Is Bennu space trash or scientific treasure? While "rubble pile" sounds like an insult, it's actually a real astronomy classification.

"Rubble-pile asteroids like Bennu are celestial bodies made from lots of pieces of rocky debris that gravity compressed together," according to NASA.

Bennu is a primordial artifact preserved in the vacuum of space, orbiting among planets and moons and asteroids and comets.

Because it is so old, Bennu could be made of material containing molecules that were present when life first formed on Earth.

All Earth life forms are based on chains of carbon atoms bonded with oxygen, hydrogen, nitrogen and other elements. However, organic material like the kind scientists hope to find in a sample from Bennu doesn't necessarily always come from biology.

"It would, though, further scientists' search to uncover the role asteroids rich in organics played in catalyzing life on Earth," the US space agency noted.

"Extraterrestrial jewellery sounds great, and Bennu is likely to be rich in platinum and gold compared to the average crust on Earth," NASA said.

Closely studying this asteroid will give answers to questions about whether asteroid mining during deep-space exploration and travel is feasible.

Although rare metals attract the most attention, water is likely to be the most important resource in Bennu.

Given the high cost of transporting material into space, if astronauts can extract water from an asteroid for life support and fuel, the cosmic beyond is closer than ever to being human-accessible.

Early Earth-based observations of the asteroid suggested it had a smooth surface with a regolith (the top layer of loose, unconsolidated material) composed of particles less than an inch (a couple of centimeters) large - at most. IANS