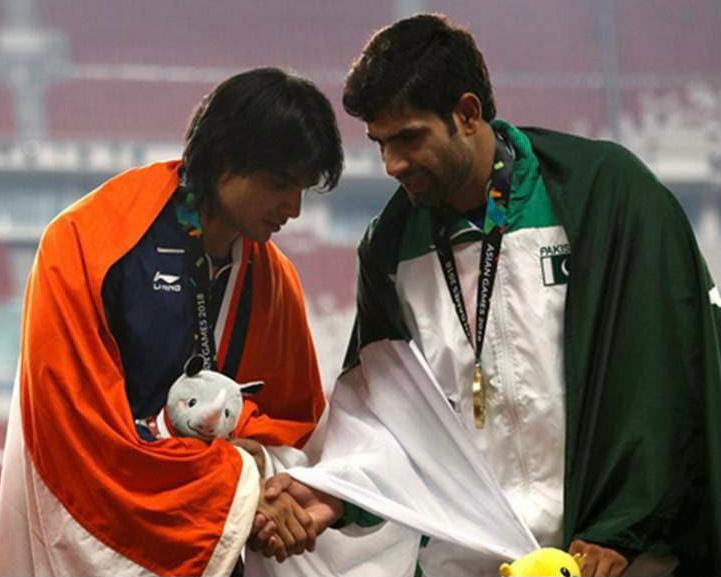 Pakistani javelin thrower Arshad Nadeem, whose picture shaking hands with Indian javelin thrower Neeraj Chopra at 2018 Asian Games had gone viral, topped the Group B in the qualification round to reach the final at Tokyo Olympics.

Neeraj Chopra becomes the first Indian to top the qualification at any athletics event at the Olympics.

At the Olympic Stadium, the 23-year-old Chopra, the junior world champion, cleared the automatic qualifying mark of 83.50 metres with his first attempt of 86.65 metres in Group A to emerge a strong contender for a medal in the final to be held on Saturday. Vetter qualified second from Group A with a throw of 85.64 metres.

Pakistan's Arshad Nadeem, who shared the podium with Chopra at the 2018 Asian Games in Jakarta, was overall third with his best throw of 85.16 metres after he topped Group B.

All eyes will be on Chopra in Saturday's final as he is on a roll this season and is the owner of the national record -- 88.07m -- which he achieved at the Indian Grand Prix in March.

Germany's Vetter -- the 28-year-old who hurled the spear to a distance of 97.76 metres in an event in Poland last September and threatened Czech Republic's Jan Zelezny's world record of 98.48 metres (1996)  -- was below-par on Wednesday, managing a best of 85.64 and taking all three attempts before he could make the grade. In contrast, Chopra made only a single attempt. With IANS inputs