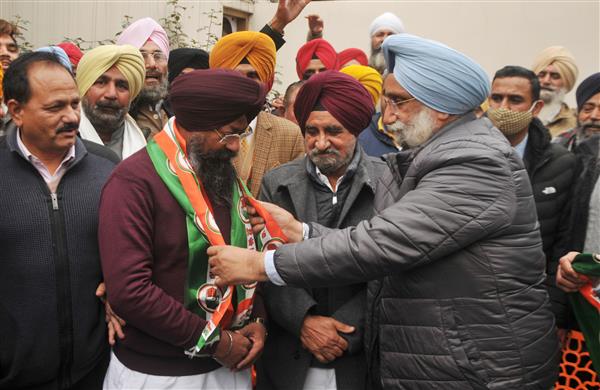 He changed his decision after Deputy Chief Minister Sukhjinder Singh Randhawa met him at his residence here on Monday.

Taking a cue from senior party leaders from the region, Sachar, Congress Amritsar Rural president, had been campaigning and distributing even grants in the Majitha Assembly segment.

However, his hopes were dashed when the party gave ticket to Jagwinder Pal Singh, alias Jagga Majithia, 60, for the seat. Jagga Majithia is the brother of Sukhjinder Raj Singh Lalli Majithia, who had switched over to the Aam Aadmi Party.

Political experts are of the view that the move aims at stopping the split in party votes in the rural segment by fielding brother against brother. Jagga Majithia, who had won an election of councillor in 1992 and remained general secretary of Punjab Youth Congress, claimed that he had the support of the entire Congress leaders, including MP Gurjeet Singh Aujla.

Return of Sachar to the party fold has avoided further split in the Congress votes in Majha, where senior Akali leader Bikram Singh Majithia had won all three previous elections in a row.

On being asked as to what prompted him to join the BJP, Sachar said the decision was taken in the heat of the moment and he will repent all his life for taking this step. He attributed this to extreme shock which he felt after not finding his name as the Majitha candidate. He said the party has now called him to Chandigarh on Tuesday to attend a meeting.