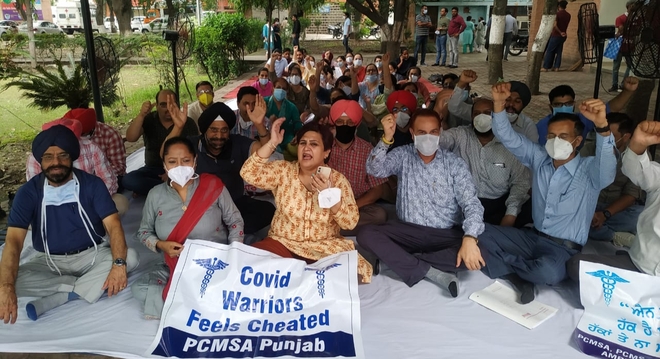 To intensify the protest, all administrative works at the Civil Surgeon’s office have also been boycotted by the employees resulting in the loss of services for the general public.

With no end in sight, the ongoing protest by the medical fraternity has been proving dearer for the poor patients, as they were unable to get the required medical help.

Now, as the administrative services have also been disrupted, the public services as birth and death registration, disability certificates and others have been stopped.

The employees are protesting against the reduction in non-practising allowance (NPA), its delinking from the basic salary and cut on other allowances for last one month.

PCMSA Amritsar president Dr Madan Mohan said talks are going on with the state government. He hinted that a solution might be found soon, as positive indications have been received.

Sunita Devi, a visitor to Government Medical College, said: "Government hospitals are usually visited by poor people as they cannot afford treatment at private hospitals. As my son is sick, I will now have to visit a private clinic, which is costlier compared to OPD charges at government hospitals."

Meanwhile, the Veterinary Officers’ Association held a protest at the Veterinary Department for the third consecutive day and boycotted services. Association president Dr Gagandeep Singh Dhillon said the adamant attitude of the Finance Minister was responsible for the loss of services for the public.

Tarn Taran: With no fruitful results from Tuesday’s meeting with the government, the PCMSA members continued with their strike at all government hospitals in Tarn Taran district against the report of the 6th Pay Commission. The doctors also closed the offices of the SMO and Civil Surgeon here on Wednesday. Dr Jaspreet Singh, president, PCMSA, said on the recommendation of the 6th Pay Commission, the non-practising allowance (NPA) has been reduced from 25 per cent to 20 per cent and delinked from the basic pay, which will result in financial loss to doctors. The strike was held in protest of that but emergency and Covid-related services were exempted. The government has constituted a committee comprising principal secretaries to resolve the issue, but the meetings bore no fruit. The protesting doctors said they were hopeful that the government would take up the matter at the earliest. Dr Satwinder Singh, Dr Surinder Bhagat, Dr GS Kalra, Dr Surinder, Dr Navpreet, Dr Ramandeep Padda, Dr Sumeet Singh, Dr Sahil Gupta, Dr Pankaj Arora were present in the protest lodged in front of the Civil Surgeon's office. OC