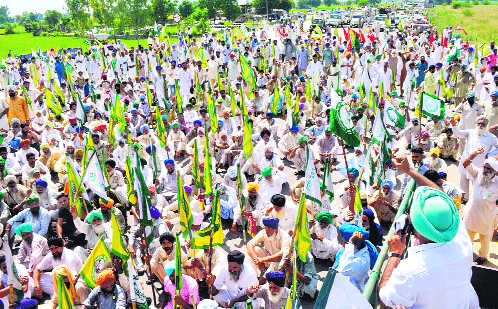 The farmers led by the Kisan Mazdoor Sangharsh Committee on Wednesday announced that they would move the first batch of farmers to Delhi on November 26 in tractor trolleys to further strengthen the national movement against the farm laws.

Sarwan Singh Pandher, a senior leader of the Kisan Mazdoor Sangharsh Committee, said, “The Central Government’s refusal to allow the dharna in New Delhi is against democracy. The first batch will include farmers of Amritsar and Tarn Taran districts. The state committee in a meeting has decided to start preparations on a war footing for taking out a march to Delhi from November 19 onward.

Addressing farmers on the 56th day of the ‘rail roko’ movement at Jandiala Guru, state general secretary Sarwan Singh Pandher and senior leader Harpreet Singh Sidhwan said that the Union Government could not blackmail farmers by running passenger trains under any lame agreement as they were behind the economic blockade of Punjab. The government should end the economic blockade of the state and start goods trains.”

Pandher said their organisation would neither cooperate with the joint committee of the Modi government nor will they be part of it. On the occasion, Satnam Singh Manochahal, Resham Singh Ghurkwind, Charan Singh Banka, Lakhwinder Singh Plasour, Satnam Singh Khare, Amrik Singh Jandoke, Sarwan Singh Walipur, Naranjan Singh Bargadi and other leaders were present.