Rajinder is milking every potential drop of hope from pandemic 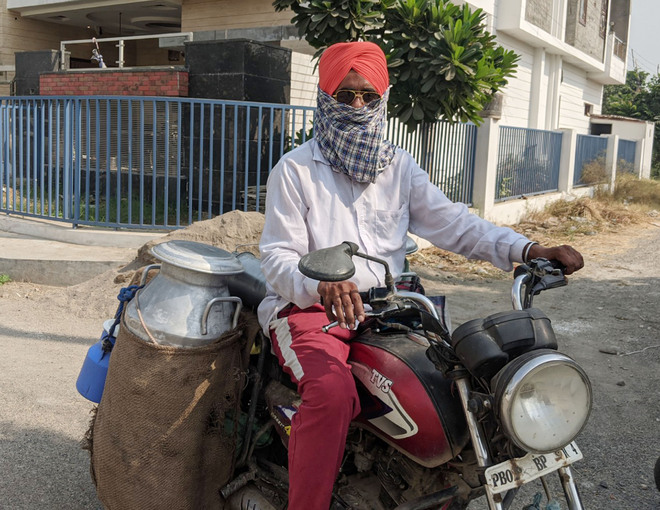 Rajinder Singh on his motorcycle in Amritsar. Photo: Vishal Kumar

Rajinder Singh’s usual routine is in full swing following the thinning down of pandemic and ensuing curbs.

Being a milkman, he rises up as early as 3:30 am to feed his cattle. Then, till 5 he would milk his five buffaloes and four cows before collecting the remaining produce from his relatives residing nearby to full the stock.

Without wasting any time, he’s on the road delivering milk to around 20 permanent customers in the city and some temporary ones here and there in different localities. Afterwards, he goes to the market to collect essentials for the livestock like medicines etc and returns home to work on his farm abounding with fodder and other crops.

Rajinder feels the government should buy all the milk from milk producers through its agencies and provide to consumers on a controlled rate. There should be check on the synthetic and adulterated milk. Otherwise the demand of milk is being fulfilled by the synthetic milk and farmers are not getting good price for it.

However, the routine might be going smooth but isn’t yielding the desired result. About the thorn in the flesh, Rajinder says that he gets around Rs60 per liter for buffalo milk and Rs 40 per litre for cow’s; which does not suffice for expenses. “If we calculate the expenses, the milk should cost more than Rs100. The farmers are no more interested to keep the cattle. They have to spend a lot on the cattle,” he adds.

His claim fits well as the accommodation, fodder, medicines and labour has to be taken care of but the price of milk is very low. He laments: “The business is not viable but we don’t have any other option.” In evening, after feeding fodder to cattle, he sets out again to deliver milk to his nearby customers like shopkeepers. goes to bed early so that he can efficiently run his chores the following day.

As the pandemic dealt a heavy blow to his customers, it had a rippling effect on his income. “A few customers lost their jobs during the lockdown and now are reluctant to pay for the milk. The expected hike in the milk was also delayed,” says Rajinder, who hails from Malakpur village near Manawala.

He is well aware of other milkmen resorting to unfair practices like adulteration due to very low earning in this business. “Moreover, the payments of co-operative and private dairies are not adequate for efficient functioning,” he adds.

The dairyman thinks that the government could’ve done something to address the issue. Perhaps, a well-planned policy could have done the trick. “The government should buy all the milk from milk producers through its agencies and provide to consumers on a controlled rate. There should be check on the synthetic and adulterated milk,” Rajinder points out.