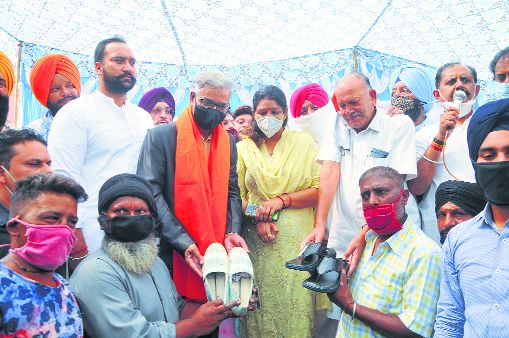 Members of an NGO donate shoes to sweepers during an event in Amritsar on Wednesday. photo: vishal kumar

A programme was chalked out at ward no 27, Krishna Nagar Dhobi Park, to distribute shoes to the sanitation workers and sweepers by the Meher Foundation under its initiative named as Jazba.

The programme was organised by an NGO in the East Constituency. Congress MLA Navjot Singh Sidhu, was the chief guest on the occasion. He could not turn up due to unknown reasons.

Meanwhile, around 400 pairs of shoes were distributed among the needy.

Girish Kumar, husband of the councillor, said this programme was arranged by Sidhu only in collaboration with a Patiala-based foundation. “Sidhu could not come due to some personal reasons, but the Meher Foundation’s director has distributed the shoes to the needy,” he said.