YAMUNANAGAR: Twelve men sustained burn injuries after a factory caught fire due to gas leakage from an LPG cylinder in the industrial area here on Monday. 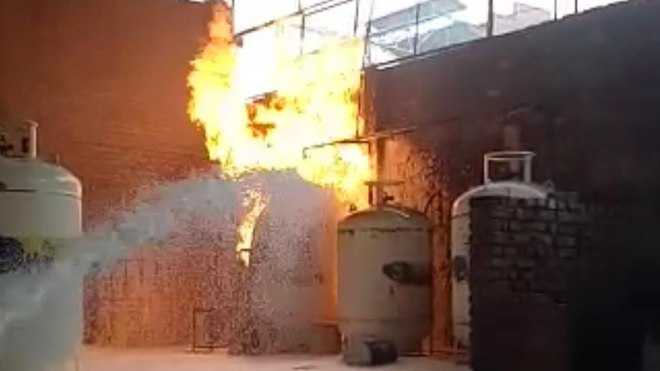 A factory in Yamunanagar on fire on Monday. Tribune photo

Twelve men sustained burn injuries after a factory caught fire due to gas leakage from an LPG cylinder in the industrial area here on Monday. The injured persons — factory owner Rajnish and 11 workers — were taken to local private hospitals, from where nine of them were referred to the PGIMER, Chandigarh.

One the workers, Vikas, was discharged after getting the first-aid treatment.

“Workers were replacing an empty LPG cylinder with a gas-filled one when it caught fire. The gas-filled cylinder was leaking. The cylinders are used to run a furnace in the factory and the weight of one cylinder is 450 kg,” Sahni said.

Soon, the fire spread in a section of the factory and 12 men sustained injuries.

Six fire tenders were pressed into service to douse the flames.

“It took an hour to put off the fire. There were three gas-filled LPG cylinders in the factory when the fire broke out,” said Pramod Duggal, fire officer.

Sahni said, “We are probing the reason behind the incident. Action will be taken against factory owners if they are found to be negligent.”

Deputy Commissioner Mukul Kumar and Superintendent of Police Kuldeep Singh, meanwhile, visited a private hospital in Jagadhri to enquire about the health of injured persons.