CHANDIGARH:Chandigarh’s Sohini pummeled Sai Sree Reddy of Telangana on Tuesday to start her campaign at the 3rd Women’s National Boxing Championships in Vijayanagara on a winning note. 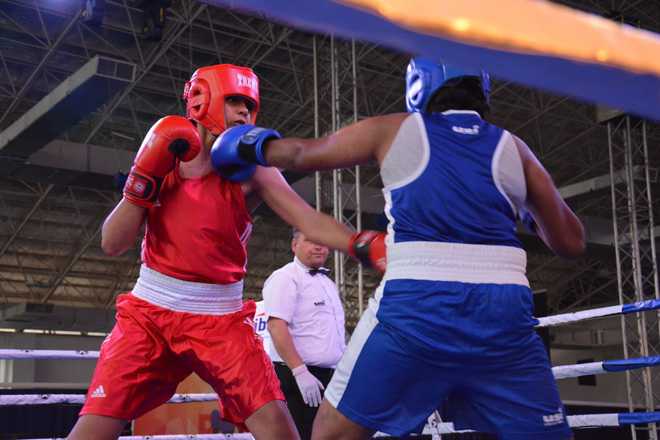 Chandigarh’s Sohini pummeled Sai Sree Reddy of Telangana on Tuesday to start her campaign at the 3rd Women’s National Boxing Championships in Vijayanagara on a winning note.

Competing in the 69kg class, Sohini exhibited sublime form as she went on the offensive right from the start, landing some mighty blows on her opponent. Such was her dominance that the referee had to stop the bout in the first round.  Earlier, the day began with a dominating performance by Delhi’s Riya Tokas in the 54kg category. Riya landed a flurry of punches on Tamil Nadu’s V Vinodhini in the first round and continued her attacking approach in the next two rounds to register a comprehensive 5-0 win.

Meanwhile, the closest bout of the day was fought between Babita Bisht of Uttarakhand and Rajasthan’s Suman Khoda in the 69kg category.

Both the boxers kept the audience engaged as they traded some strong punches right from the start. It was an even contest and the bout turned in favour of Babita only in the last minute of the third round.

The Uttarakhand pugilist avoided a lot of punches with her sound defence and launched a string of clear punches to eventually win the bout with a 3-2 verdict.

In the bantamweight, Riya Chouhan of Punjab started her game cautiously against Bengal’s Poulomi Sarkar. She, however, went all guns blazing in the second round, only to be stopped by the referee.

Himachal Pradesh’s Sandhya defeated Sonal Rasal in the 64kg category. Sandhya used her technical superiority and played a waiting game before going on the offensive in the final round to finish off the bout in her favour.

Sandhya will be up against World Championship bronze medallist Simranjit Kaur

In the welterweight category, Gagandeep Kaur of Punjab rounded off a great day for her state by beating Simran Mendon of Maharashtra 5-0.

The third day of the championships will witness international stars in action with the likes of Nikhat Zarin, Pinky Jangra, Simranjit Kaur, Sonia Lather and Shashi Chopra battling it out for top honours.