MOHALI: Witnessing a brawl between two brothers proved dearer to two residents of Mastgarh village in Mohali who suffered gunshot wounds when one of the brothers, who wanted to challenge his cousin over some land dispute, fired shots into the air. 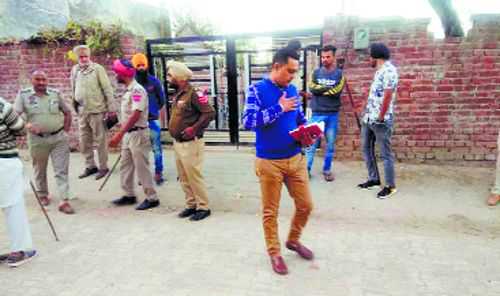 Witnessing a brawl between two brothers proved dearer to two residents of Mastgarh village in Mohali who suffered gunshot wounds when one of the brothers, who wanted to challenge his cousin over some land dispute, fired shots into the air.

Both injured have been identified as Chhinder Singh (70) and Jeet Singh (40). They have been admitted to hospitals in Kharar and GMSH, Sector 16. Chhinder was later shifted to the PGI. Both are out of danger.

The police have arrested the suspect, identified as Gurpreet Singh (30), who fired two shots from his licensed .12-bore shotgun. He will be produced before the local court on Monday.

The police said Gurpreet's cousin Jaswinder said there were three accomplices of the suspect present at the time of the incident. However, their identity is yet to be ascertained, the police said.

The police said Gurpreet and Jaswinder were having a dispute over a plot of about 50 yards and the former attacked Jaswinder with a knife. The suspect later reached Jaswinder's house and opened fire into the air to challenge him, but the shots hit two villagers standing nearby.

On a statement of Jaswinder, a case has been registered against four persons, including Gurpreet, under sections 307 (attempt to murder), 324 (voluntarily causing hurt by dangerous weapons or means), 506 (punishment for criminal intimidation) and 34 (acts done by several persons in furtherance of common intention) of the Indian Penal Code (IPC) and section 25-54-59 of the Arms Act at the Mullanpur police station.