Change or chaos in North? 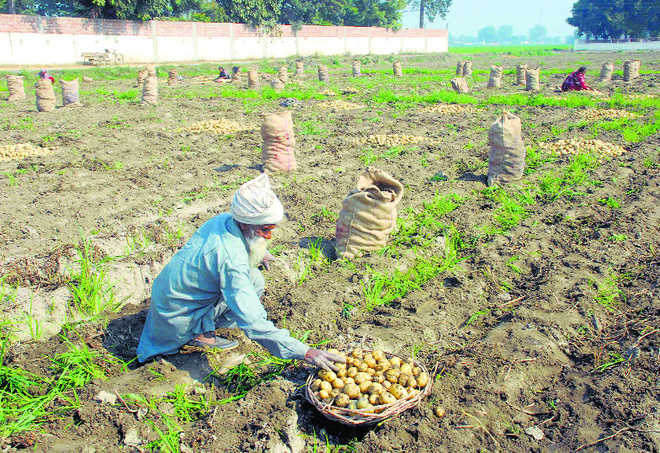 Farmers have observed that the size of potato tubers has been changing due to changes in climate leading to decreased yields. Sowing time of potato has also shifted from September 10 to October 20.

Man-made activities, especially large-scale destruction and industrialisation for the last few decades, has resulted in rapidly increasing emission of greenhouse gases leading to climatic irregularities. The Inter-governmental Panel on Climate Change (IPCC) has predicted that the average global temperature during this century may rise between 2 to 4.5 degree Celsius as a result of the doubling of carbon dioxide levels caused by anthropogenic activities. Extreme weather events, including severe heat wave, cold wave conditions, floods and droughts are being witnessed more frequently during the recent decade. Similar climatic disturbances are being witnessed in the agriculturally most productive northern region of the country, especially the states of Punjab and Haryana. Since the region is designated as the food bowl of the country, the climatic disturbances could have a detrimental impact on the food security of the country.

Analyses of the long-term weather records during the last five decades in northern parts of the country indicate that there has been a significant increase in minimum temperature at the rate of 0.05 degree Celsisus per year and relative humidity at the rate of 0.17 per cent per year over the years, whereas sunshine hours and wind speed have significantly decreased (at 0.04 hour/day and 0.03 km/hour annually), thereby indicating signs of climate change. However, despite the significant trends of climate change as observed through these parameters, large inter-annual variations are also conspicuous. These fluctuations in weather conditions have rather increased during the recent years. For instance, several recent years witnessed an adverse effect on wheat productivity in the region due to an abrupt rise in both maximum and minimum temperature during the month of February/March. Although weather parameters, viz. maximum temperature, rainfall and number of rainy days, did not depict significant trends of increase or decrease over the years, these have shown significant inter-annual fluctuations during the last 50 years. The inter-annual variations in rabi season rainfall and the number of rainy days have been observed to be as high as 52 and 41 per cent, respectively, during the last five decades. The inter-annual fluctuations in the number of rainy days during the rabi season further increased to 44 per cent during the recent decade. Thus, it will not be wrong to designate these fluctuations as ‘climate chaos’ rather than ‘climate change’. The climate chaos has rather complicated the uncertainties with increased intensity and frequency of extreme weather events and their severe impact. For instance, during the recent rabi season (2018-19), favourable weather conditions with good amount and distribution of rainfall, were expected to produce bumper wheat yields, but adverse weather during the harvest/maturity took a toll on the quality and quantity of the produce. Highly erratic pattern of rainfall also threatens the water availability in the region. As the groundwater resources are already over-exploited, erratic rainfall patterns in different years can further aggravate water scarcity in the years to come. Such climatic aberrations have resulted in “climatic chaos” in the region, bringing about an unpredictable atmospheric condition every now and then.

What led to the crisis?

Modern lifestyle and human activities interfering with natural processes and ecosystems are mainly responsible for the emission and accumulation of greenhouse gases in the atmosphere. Various development processes, including industrialisation, urbanisation, deforestation and intensive agriculture with non-judicious input use along with increased use of vehicles, air-conditioners and refrigerants etc. lead to excessive emission of greenhouse gases, resulting in global warming and climate crisis. Excessive use of nitrogen fertilizers add nitrogen oxides in the atmosphere. Paddy fields with continuous flooding are responsible for the emission of methane gas because of anaerobic respiration. The burning of fossil fuels is on the rise because of an increase in population, ever-increasing number of vehicles, industrialisation and urbanisation, leading to an emission of carbon dioxide, a major culprit for enhanced anthropogenic greenhouse effect. About half of the cumulative anthropogenic carbon dioxide emissions between 1750 and 2010 have occurred in the last 40 years, contributed mainly by fossil fuel combustion and industrial processes.

Uncontrolled urban sprawl due to exponential increase in population and migration of people from the rural to urban areas has resulted in unplanned urbanisation. Urban areas have almost negligible vegetation, which is essentially required for moisture conservation and temperature moderation. In addition to sequestering carbon and improving air quality, trees regulate temperature by providing shade and through evapotranspiration. Green vegetation has been observed to lower wall temperature by 17 degree Celsius leading to decreased air-conditioning load by about 50 per cent. Lack of vegetation along with concretisation and traffic congestion has converted the cities to heat islands, making them environmentally sick. A study has predicted an increase in temperature by one degree Celsius during the summer and two degree Celsius during the winter season by the middle of the 21st century over the Indian sub-continent.

Climate change has a significant impact on crop productivity as well as livestock in the region. Increasing temperature and decreasing radiation levels cause adverse effects on the growth and yield of many crops. Similarly, increase in relative humidity and decrease in sunshine hours have serious implications on the occurrence of insect pests, rate of photosynthesis and finally crop yield.

In an interactive group meeting on climate crisis held at Punjab Agricultural University, Ludhiana, farmers observed that the size of potato tubers has been shrinking due to changes in climate leading to decreased yields. It has also been observed by the farmers that the sowing time of potato has shifted from September 10 to October 20. The farmers also felt that the attack of thrips and mites in chilli has increased. Such impact of climate change could have severe implications on food security in the coming years.

It is evident that climate crisis has been adversely affecting all spheres of life. Weak economic conditions and lack of infrastructure facilities in the region have made it more vulnerable. Agriculture has multiple relations with the environment. On the one hand, it affects the environment by the emission of various gases, and on the other, it is highly affected by global warming and climatic aberrations. Thus, there is a dire need for practising various mitigation as well as adaptation strategies.

Mitigation: It involves reducing the emission of greenhouse gases into the atmosphere, thereby checking warming. Thus, the most important step to avoid such emissions would be to develop and use more efficient renewable energy sources like water, solar energy and wind etc. Large-scale burning of crop residue in the region leads to the emission of carbon dioxide and other gases into the atmosphere. In-situ crop residue management should be encouraged to enrich soil organic matter, maintain soil health and check the emission of gases. Efficient nutrient management by need-based fertiliser application can check emissions and improve nutrient use efficiency. More efficient rice cultivation systems like direct dry-seeded rice, intermittent irrigation in rice rather than continuous flooding should be preferred. Conservation tillage, organic production, cover cropping, crop rotation, efficient irrigation and agro-forestry practices can increase the carbon stored in soil while reducing emissions.

Agroforestry can provide a unique opportunity to address the dual challenge of climate change adaptation and mitigation by creating synergies between both. Carbon tax and emission markets also need to be generated to check their unlimited emission into the atmosphere. Improved livestock production and management systems should be adopted to check methane emissions.

Adaptation: This mainly involves taking appropriate measures to check the negative impact of climate change. Thus, it involves steps taken to cope with the situation, which can be done either by reducing exposure to the risk or by building capacity to cope with the damages. Crop diversification, intercropping or mixed cropping are some of the options to decrease vulnerability to weather shocks. Similarly, changing cropping patterns or planting dates in view of the changing climatic conditions can be of great help to reduce the negative impacts of climate crisis. Breeding for early maturing, high yielding, heat tolerant and drought-resistant cultivars need to be encouraged. Appropriate practices to improve input use efficiency like reduced tillage, integrated nutrient management, bed planting, laser land levelling, intermittent irrigation, need-based nutrient management etc. need to be adopted not only to enhance profitability but also to conserve the natural resources. Improved crop residue and weed management are the other practices to improve soil and crop health, making it more resilient to climatic crisis. Incorporation of crop residue in the soil helps in holding it together and reverting the process of desertification.

As the region is suffering from over-exploitation of water resources and the situation is likely to deteriorate in view of the increased uncertainty in rainfall patterns, adopting improved irrigation systems along with soil water conservation and rain/runoff water harvesting and micro-irrigation techniques can lead to significant improvements in water use efficiency. Manipulation of crop microclimate by wind breaks, mulching etc moderates soil temperature, suppresses diseases and harmful pests and conserves soil moisture, thereby avoiding climatic stresses by providing favourable microclimate for better crop growth and yields.

The accurate, timely weather forecasts and agro-advisories should be available to the farmers for short-term and long-term agricultural planning. As the repercussions of climate crisis are very important for the future welfare of mankind, the general public needs to be made aware of it and governments world-wide should work out plans and policies to contain climate crisis and keep our earth and environment healthy and safe for our future generations.

Increase in temperature increases the rate of respiration and decreases net photosynthesis, thereby adversely affecting the crop productivity. The intensified heat  can reduce crop duration, increase crop respiration rates and accelerate nutrient mineralisation in soils, decrease fertiliser use efficiency and increase evapotranspiration leading to reduced crop productivity in the near future. Increase in minimum temperature under Punjab conditions has an adverse effect on tillering and yield of the wheat crop.

The potential of field and tree crops to sequester carbon should be fully exploited. Forests are a large sink of carbon as a single tree is estimated to absorb 1.33 tonnes of carbon dioxide per year. Afforestation plans, both in urban and rural areas, need to be developed and executed so as to enhance carbon sequestration. The development and encouraged use of non-wood products can also help to maintain and protect forests and may hence aid in mitigation.

(The authors are professor of agrometeorology and Dean, Faculty of Agriculture, PAU)