A salute to great economists

The year 2017 has already witnessed the passing of two extraordinary figures in the world of economics. 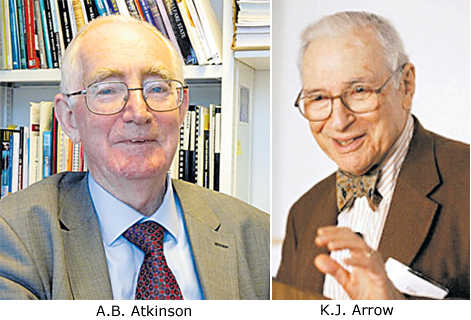 The year 2017 has already witnessed the passing of two extraordinary figures in the world of economics. Sir Anthony Barnes Atkinson (1944-2017) passed away on New Year's Day, at the relatively early age of 72, after a battle with cancer; and Kenneth Joseph Arrow (1921-2017) passed away on February 21, at the age of 95. This article is a brief commemoration of these two outstanding contributors to the realm of economic ideas. Arrow's work in economics is so seminal and so wide-ranging that he must be regarded as one of the first among equals in the list of those that have shaped the discipline. His research (in a space-saving exiguous catalogue) covers the fields of welfare economics, social choice theory, general equilibrium analysis, the economics of risk and uncertainty, and the economics of asymmetric information, not to mention work in econometric theory. It is impossible to avoid bumping into Arrow, no matter what area of economics one considers.

Thus it is that we have (in another deliberately skimpy list) the Arrow Impossibility Theorem; Arrow's Extended Sympathy; the Arrow-Debreu Model of General Equilibrium; the Arrow-Pratt Measures of Risk-Aversion; the Arrow Model of Health Insurance and Market Failure; and the Arrow-Chenery-Minhas-Solow Production Function. In 1972, Arrow was awarded the Nobel Prize in Economics — he is the youngest person, at the age of 51, to receive the honour. For the larger part of his academic career, Arrow was associated with Stanford University, and with three of its departments — those of Economics, Operations Research and Philosophy. For a mathematical economist credited with importing formidable standards of formal rigour and technical finesse into economics, Arrow took a broad and humane view of the subject, which found ample space for both philosophy and poetry in his reckoning of it. Thus, in his 1971 book on General Competitive Analysis, written with another mathematical economist, Frank Hahn of Cambridge, we find an ironic reference to the Standard Model of Rational Economic Man in the form of a fragment from a poem of W. B. Yeats':

That never looked out of the eye of a saint

Or out of drunkard's eye.

Another example of Arrow's capacious catholicity is to be found in the inspiration for his rigorously coceived view of “extended sympathy” as a form of ordinal interpersonal comparison of utilities: he discovered this inspiration, during a visit to England, in a 17th century tombstone bearing this inscription:

As I would do were I Lord God,

And Thou wert Martin Engelbrodde.

It is typical of Arrow that he translated this sentiment into the formulation (x,i)P*(y,j). Atkinson, like Arrow, was a rigorous economic theorist, who started out studying mathematics before switching to economics, and was much influenced by the earlier-mentioned economist Sir Frank Hahn, at Cambridge, where Atkinson did his undergraduate degree. He is one of the few very great contemporary academics who never did a Ph D. He is also one of the greatest modern economists — along, I would say, with Piero Sraffa, Joan Robinson, and Serge-Christophe Kolm — who was never awarded the Nobel Prize (a discredit to the Nobel Committee that is only compounded by some of the wholly undeserving names that have made it to the Nobel Laureates' list). Atkinson's name will be inextricably linked with the subjects of inequality and poverty. He wrote at least two path-breaking journal articles: one (published in The Journal of Economic Theory in 1970) was titled “On the Measurement of Inequality”; and the other (published in Econometrica in 1987) was titled “On the Measurement of Poverty”. If he had written nothing else, these two essays between them would have served to account for a life-time's work. Atkinson, at the end of his career, was Centennial Professor at the London School of Economics, and Senior Research Fellow at Nuffield College, Oxford.

The details of Arrow's and Atkinson's scientific contributions can be found in Wikipedia, among other sources. Here, I would like to share a couple of personal reminiscences that reflect both the extraordinary and the human-size features of their character. (If there is some suspicion that I am about to engage in a bit of name-dropping, then the suspicion is well-founded: I am not too proud to say that I feel deeply privileged to have had the opportunity, in my lifetime, of being associated with these gentlemen, however briefly and tangentially.) I have met Arrow just once. This was in the mid-1980s when Arrow was a guest of the Delhi School of Economics, and I was visiting that institution then. The economist P. R. Brahmananda, who claimed to possess some astrological skills, was present on the occasion, and he insisted on reading Arrow's palm in which he said he detected "two stars", of which one had already been realised. Arrow chuckled and said the first star must be the Nobel, and he hoped the second star didn't mean another Nobel was on the way — one was quite enough. During a quiet moment that evening I asked Arrow if the suggestion that he had cracked the Arrow Theorem in just three weeks, when he was still a PhD student, was a true story or an apocryphal one. Arrow leant forward with a grin, and said in a confidential whisper: “Apocryphal, actually. Actually, it took me only two days. The first day, I proved that the result held for triples. After a disturbed night's sleep, on the following morning, I generalised the result.”

Atkinson, like Arrow, was a simple, direct person, whose humility showed through his soft-spoken conversation. I once shared a long walk with him on the evening of a conference held in the city of Viterbo, not far from Rome. Somehow the conversation turned to the famously eccentric Cambridge don Frank Hahn (mentioned earlier) who had been a considerable influence on Atkinson in the latter's student days.

Atkinson recalled wryly that on the occasion when he first met Hahn, the latter opened the door to his knock and confided that he had been told to expect Atkinson who, Hahn added he had been informed, wasn't quite the idiot he looked… I had the great good fortune of working with Atkinson as a member of the advisory board of the World Bank appointed Commission on Global Poverty. Atkinson was chairman of the commission, and the report which he authored, as chairman, was the last significant piece of work he did, toward the end of 2016. It is a heroic record of work, conducted against the impossible odds of his illness, and requiring him to balance the views of 23 other scholars on the advisory board, while finding place in the report for his own convictions and predilections. Like the man, the report was firm, frank, principled, and polite: critical of the World Bank, but without carrying a sledgehammer to the criticism. In the generally bleak intellectual and moral environment in which professional thinkers these days often find themselves subsisting, it is nice to be able to say, of persons like Kenneth Arrow and Tony Atkinson, that these were not only great, but also very good, men.

The writer is an economist