SCORE one for Presidents Barack Obama and Hassan Rouhani for negotiating a nuclear deal that could be a regional and global geopolitical game changer. 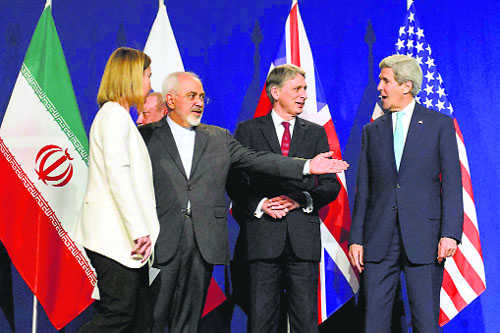 SCORE one for Presidents Barack Obama and Hassan Rouhani for negotiating a nuclear deal that could be a regional and global geopolitical game changer. Given the unravelling of US relations with Russia over crises in Europe, the stalled pivot to Asia to counter China’s rising regional profile and the failed effort to abort the China-led Asian Infrastructure Investment Bank, the successful Iran deal could well become the defining foreign policy legacy of the Obama presidency. Conversely, should an obstructionist US Congress derail the deal, international support necessary for maintaining an effective sanctions regime on Iran will wither away.

Suspicions have persisted for a long time that Iran has been using its peaceful nuclear programme as a cover for clandestine weapons acquisition. The development would have negative consequences for every component of the nuclear arms control agenda, from increasing proliferation pressures in and beyond the region to heightened risks of nuclear terrorism, use of nuclear weapons, and setbacks to efforts to cut global nuclear stockpiles and reduce their role and salience in national security doctrines.

Iran has made many offensive and belligerent threats both against the Jewish nation and the state of Israel. It has sponsored acts of terrorism. It has nurtured and supported anti-Western factions in Iraq, Afghanistan and Lebanon. For all this, there was no consensus in Tehran on getting the nuclear bomb. There is nothing to suggest that the religious elite is not serious when it declares – as it has for three decades – that the nuclear bomb is un-Islamic because of its inhumane, indiscriminate and devastating lethality. Ayatollah Ali Khamenei, the final authority on Islamic law and arbiter of government policy, insisted that “Iran is not seeking to have the atomic bomb, possession of which is pointless, dangerous and is a great sin from an intellectual and a religious point of view.” Additional risks and costs of weaponisation include military strikes by Israel and the United States.

No credible evidence exists that Iran ever crossed the threshold into weapons production. Efforts to procure nuclear-related and dual-use material and equipment, develop means of producing undeclared nuclear material, tap into clandestine networks for obtaining weapons-related information and documentation, and work on an indigenous nuclear weapons design largely took place before 2003. Sixteen US intelligence agencies concurred that Iran halted its nuclear weapons programme in 2003 and had not restarted it. Former IAEA head Mohamed El Baradei found not “a shred of evidence” that Iran was weaponising.

From ‘no enrichment’ to ‘no bomb’

The aim of stopping Iran from developing a nuclear capability became a lost cause in this century. The real policy challenge was how to accept it as nuclear-capable but not accept it as, nor provoke it into becoming, nuclear-armed. Israel, itself an NPT-illicit nuclear power, has been demanding that Iran be forcibly prevented from acquiring the bomb. Its protestations fell on increasingly deaf ears as Israel progressively sidelined itself by its uncompromising stance and bellicose rhetoric.

A military strike can be counter-productive directly and through demonstration effects. Israel’s attack on Iraq’s reactor in 1981, instead of destroying an existing capability, may have spurred Saddam into the search for nuclear weapons. In 2003, a UN-disarmed Saddam was attacked by a US-led coalition and in 2011, a nuclear-disarmed Libya was attacked by NATO. Referring to Gaddafi, Ayatollah Khamenei said: “This gentleman wrapped up all his nuclear facilities, packed them on a ship and delivered them to the West and said, ‘Take them!’ Look where we are, and in what position they are now.” Iran continued to work on its nuclear enrichment and energy programme that moved it technologically ever closer to a weapon. Its centrifuges multiplied from 164 in 2003 to 19,000 in 2013 (although only 11,000 were usable) and a stockpile of 8000kg of enriched uranium. The interim deal in November 2013, whereby Iran agreed to scale back its weapon-sensitive material and activities under IAEA oversight in return for some sanctions relief, paused this. The tough UN, US and European sanctions to try and abort the march to weapons capability had hurt Iran. But America too paid a heavy price militarily, financially and reputationally for its addiction to invading Islamic countries and killing Muslims.

The 2013 deal resulted not from Tehran’s capitulation but from the election of a new president keen to explore a rapprochement with the EU and US, and the shift in the US red line, over vociferous Israeli objections, from “no enrichment” to “no bomb.” Any effort to verifiably and irreversibly roll back Iran’s nuclear breakout capability would prove futile. For reasons of security – history and geopolitics give both Iran and Israel a nightmarishly bad neighbourhood – as much as national pride, Iran insisted on maintaining material and infrastructure that give it some minimum capability to weaponise in future if necessary. The key challenge ahead was to define the precise terms of the nuclear programme Iran is permitted to keep in return for the complete lifting of all UN, multilateral and national nuclear-related sanctions.

The agreement marks a triumph of Obama’s nuclear diplomacy. The Bush years (2000–08) proved to be disastrous for efforts to contain the nuclear weapons programmes of both North Korea and Iran. Neoconservatives – who believed in using US power to transform the world, were openly disdainful of arms control treaties and diplomacy, and aimed to eliminate regimes rather than weapons – gained policy ascendancy in the administration. When President Bill Clinton left office, Iran had a tentative nuclear research programme with few centrifuges; by the end of Bush’s tenure Iran had an industrial-sized uranium programme and thousands of operational centrifuges.

The surprisingly detailed specificity of the framework agreement should mollify critics and satisfy opponents in Washington but could prove problematical for Tehran. Iran has been wary of falling into the Oslo trap. In the 1993 Oslo accord, the Palestinians made many concessions but failed to reap any benefits owing to Israeli intransigence which Washington proved unable or unwilling to overcome. Hardliners in Tehran will mobilise to try and scupper the sellout deal that, in their view, seeks to drink from the poisoned chalice of a flawed agreement with Washington. US Sunni allies in the region, in particular Saudi Arabia, may also demand matching enrichment capability. Thus legal, political and financial challenges remain on the road to a comprehensive political agreement by the June 30 deadline. But the agreed inspections, verification and transparency measures will successfully close off all pathways (uranium and plutonium) to the nuclear bomb by Iran.

The Lausanne agreement also has the potential to unfreeze the bitter Iran-US enmity that has framed Middle East geopolitics since 1979. By ending Iran’s isolation and bringing it back into the international fold, the West can help to rebuild its once-powerful secular middle class, dilute the influence of the radical clergy, turn Tehran into an ally to defeat the Islamist jihadists, and accelerate negotiations on regional issues like Afghanistan, Syria, Iraq and Lebanon. Bringing closure to the 36-year conflict with Iran will also reduce Washington’s energy and geopolitical dependence on Riyadh and give it more latitude to focus on China’s continued rise in the Asia–Pacific and Russia’s return to nuclear brinksmanship in Europe.

However, hurdles remain on the road to a final agreement. Potential deal-breakers include the conditions and timing for phasing out and reimposing sanctions. Another important stumbling block is just how to reduce Iran’s stockpile of enriched uranium. Compared to the detailed US fact sheet, the joint EU–Iran statement is vague: this could portend turbulence ahead.

A provision in the framework agreement “encourages” international cooperation to help Iran in research and development. The deal will make it possible for countries that had been reluctant to engage with Tehran to assist Iran on its technological and scientific progress. Iran had slipped from being India’s second biggest supplier of oil in 2006 to seventh by last year. There are potential commercial gains for India from the return of Iran’s oil to the world market and regional geopolitical gains from the end of Iran’s international isolation. (See box “Implications for India”)

Even after all elements of the deal expire in 10-15 years and Iran resumes some enrichment activities, its permanent Nuclear Non-proliferation Treaty (NPT) obligation not to acquire nuclear weapons will remain in place. Containing Iran’s nuclear weapons programme does not complete the agenda of lifting the shadow of the nuclear weapons threat from the Middle East and the world.

However, the framework agreement will be a big morale booster when delegates assemble later this month in New York for the five-yearly NPT review conference.

The  writer is Director, the Centre for Nuclear Non-Proliferation and Disarmament, Australian National University.

The trick therefore was to widen the technological and detection gap between capability and weaponisation, to cap Iran’s capability at a point that provides the necessary reassurance by aligning the detection probability with the time required for effective international intervention to stop any attempted breakout. This has been successfully achieved in the framework agreement which envisages halting and reversing Iran’s weapons-sensitive nuclear programme over the next 10 years, with parts of the agreement extending to 15 and 25 years.

Iran’s number of installed centrifuges will be cut from 19,000 to 6,104; their operational number will fall from about 11,000 to 5,060; their quality will be restricted to first-generation IR-1s; and these constraints will remain in place for ten years.

Iran will not enrich uranium to above 3.67 per cent (well below weapons-grade), its total stockpile of LEU will be cut from 10,000 kg to 300 kg, and it will not build any new enrichment facilities or proliferation-sensitive heavy water reactors, all three parts to run for 15 years.

All excess centrifuges and enrichment infrastructure will be placed in IAEA monitored storage.

Natanz will be Iran’s sole enrichment facility: Fordow will be converted into a science and technology research centre, the Arak heavy water reactor will not produce plutonium and its spent fuel will be exported.

The IAEA will have enhanced access through agreed procedures to Iran’s nuclear facilities, uranium mines and the supply chain that supports Iran’s nuclear programme. As a result, over the next decade Iran’s breakout timeline – the time needed to acquire enough fissile material for one weapon – will be extended from the currently assessed 2-3 months to at least one year. In return, Iran gains early easing and the promise of eventual lifting of the crippling sanctions regime: US and EU nuclear-related sanctions will be suspended after the IAEA has verified that Iran has taken all of its key nuclear-related steps. Should Iran fail to fulfil its commitments, the sanctions will “snap back into place.” The “architecture” of US nuclear-related sanctions will be retained, allowing for snap-back of sanctions in the event of significant non-performance. A new Security Council resolution will terminate all previous nuclear-related UN resolutions upon Iranian compliance.