The media has been agog about weapons being dropped surreptitiously by Pakistani drones in Indian Punjab. 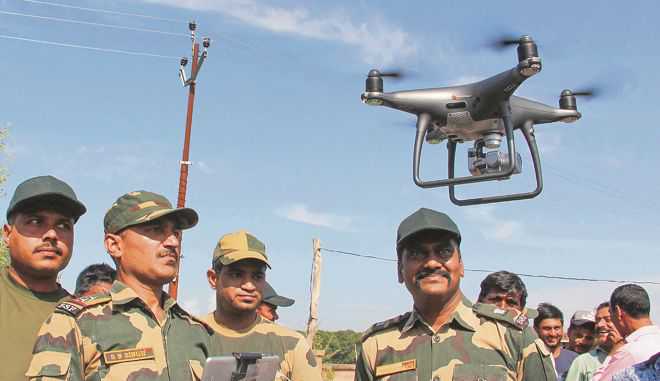 The media has been agog about weapons being dropped surreptitiously by Pakistani drones in Indian Punjab. Whilst no technical details of the types of drones employed have emerged from the pictures shown in the media, they appear to be crude low-cost platforms. The recent drone/cruise missile strike carried out supposedly by Yemeni Houthi rebels against Saudi oil farms nearly had the entire world up in arms. The advent of unmanned aerial vehicle technologies has posed a unique challenge to the air campaigner. The limitations of low-cost drones notwithstanding, in terms of any substantial load or weapon carriage or war-waging capability, given the vulnerabilities of soft civilian targets as seen in Saudi Arabia, they can cause considerable damage. Also, dropping of AK-47s, RDX and the like affords the non-state and other actors a new effective means of waging a sub-conventional war.

If media reports are to be believed, neither the IAF nor the BSF/Army was able to detect the drone activity over the LoC/IB airspace in Punjab. Of course, air defence of the Indian air space and the tactical battle area is the responsibility of the IAF and I am sure action would be at hand to counter this threat. Even in the past, the IAF has addressed these issues effectively, employing suitable radar and weapon combines.

The problem with UAV neutralisation is its low radar cross-section and low speed, which makes a tactical weapon solution challenging, especially at night. But there are enough options with the IAF/Army in terms of tactical radars AEW/AWACS/aerostats to provide timely drone detection over any given sector. And, as far as shooting it down is concerned, the use of attack helicopters, trainer aircraft such as the Kirans/Hawk or Pilatus class of aircraft could be considered as they would be more in sync with the UAV-operating regime, specially of speed and altitude. More so, when drones are used by the adversary to abet his terror campaign and drop small arms etc, the IAF needs to consider offensive action to target the launch pads themselves.

Aggressive electronic interference with the UAV-operating frequency should also be attempted to lead the drones astray. There have been techniques evolved of using an aerial net system to snatch aerial drones in flight. The intention should be to deny the enemy the use of this platform, howsoever nuisance value their employment may have.

If the technology is used by the adversary to target VIPs or strategic targets, it would be a different ball game altogether and aerial or other counter action would become imperative. The use of assets such as ‘Thrush 510 G’ light-prop aircraft or ‘Little Bird’ helicopters for such counter-terror roles is advisable. The advantage of employing such aircraft is essentially the low cost and compatibility with a UAV’s operating spectrum. With suitable armour-plating, light aircraft such as the Thrush could well be armour-plated in IAF Base Repair Depots to be employed in Counter-Terror and Combat Search And Rescue (CSAR) roles.

It may be recalled that not having a proven CSAR capability or inventory contributed directly to the IAF’s inability to recover Wing Commander Abhinandan before he was picked up by the Pak Army after ejection over their territory. The key challenge in CSAR is to keep enemy ground forces at bay, away from the downed pilot, and these special aircraft or others optimised for the role, such as the

A-10 Wartgog, make this possible.

Aerial warfare has been a continuous seesaw of offence and defence. Every offensive action elicits a novel defensive action. The use of low-speed counter-insurgency aircraft is another option to target the UAVs themselves or launch pads across the border. It is not as though drones would replace manned fighters in a hurry. Yes, UCAV (unmanned combat aerial vehicle) technology could open up interesting possibilities. But the entire spectrum of manned assets and electronic warfare spectrum needs to be exploited to counter the UAV threat. Cost-effectiveness would be an important consideration alright. Meaning, we may not like to deploy a Beyond Visual Range (BVR) class of aerial weapon against a low-cost UAV. Hence, the various options suggested.

Another important aspect for the planner is to discern what kind of targets could possibly be engaged by such UAVs. Arming a UAV had hitherto been a prowess monopolised by the US (whose Predator and Reaper drones have made a mark for themselves in Afghanistan and the

Middle East). China and Pakistan are desperately attempting this weaponisation and so is India.

It’s not only the technology to fire a missile from a UAV against a ground target and the mechanics involved in such a mission, but also to have a suitable missile of the Hellfire class which is used on the Predator/Reaper. The Indian Navy is known to be getting a Reaper class of UAV from the US for sea counter-terror missions. There’s no gainsaying that such a capability would enable the much-wanted counter-terror targeting of national enemies, such as Hafiz Saeed and Dawood Ibrahim. As also possible military leadership targets of our western adversary!

Of course, technology by itself is of no use unless backed by political will. This appears to be aplenty in the present dispensation and, thus, we could open up an entirely new regime in our counter-terror campaign. Balakot could prove to be more than a milestone in India’s proactive military strategy, including through aerial targeting and political signalling.