The bad variety of nationalism

The recent state elections and the outcomes they have thrown up are justly being celebrated as the revalidation of political democracy in India. 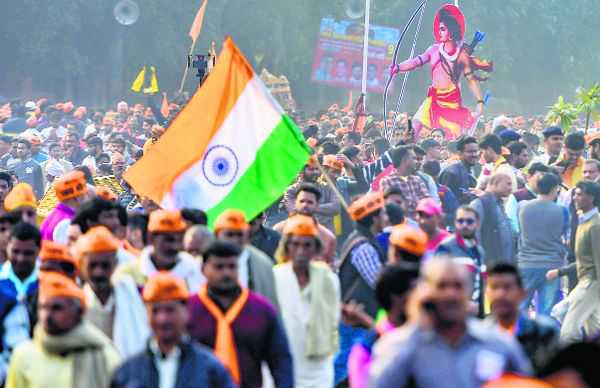 Not enough: The inability of elected governments to find solutions is breeding dissatisfaction with democracy itself. People want the ‘real’ issues to be addressed.

The recent state elections and the outcomes they have thrown up are justly being celebrated as the revalidation of political democracy in India. The powerful have been humbled, the arrogant have been chastened and those whom the people have now elected must endeavour to deliver on their promises. They might not, as we have witnessed so often in the past. It will then be time again to send them packing. This ability to change, through the ballot box, those who govern is a powerful instrument to enforce accountability of the state to its people. It is an indispensable component of democracy. Equally important are adherence to the rule of law and strong, independent and credible institutions because they ensure that electoral majority is not used to  abridge the constitutional rights of any citizen or groups of citizens, irrespective of their political, religious or ideological persuasion. When the rule of law is consistently undermined and institutions are weakened and bent to partisan ends, elections may well open the door to the demise of democracy.

There is a wave of populism sweeping across the world; India has also been caught up in its wake. Populism has a number of common features.  Populists regard parliamentary majority as a ‘unique source of legitimacy’ and reject institutional restraints. Populism equates the electoral majority as the ‘people’, defined in homogenous terms, while the rest are ‘alien’ and therefore not worthy of enjoying the rights available to the majority. Populists simplify complexity and will claim that the will of the people is sufficient to overcome all challenges; institutions and laws are considered obstacles that must be swept away or harnessed to deliver on the people’s will. Populism is anti-elitist and rejects authority based on knowledge and experience. These result in populism displaying ‘strong ethics of conviction but weak ethics of responsibility’.

The bitter fruit of populism is evident in Brexit, as it is in the Trump brand of politics. It is practised with success by Erdogan in Turkey and has delivered power in the hands of a right-wing demagogue in Brazil. All these tendencies are visible in India, to a lesser or greater degree. When populism fails to deliver, as it inevitably does, non-fulfilment is blamed on the negative legacy of previous governments or conspiracy by alien or anti-people elements. This, too, is evident in our current political discourse. The health of Indian democracy is being threatened by this wave of populism and needs to be acknowledged and confronted.

Populism often comes clothed in nationalist colours. Nationalism is a powerful force and may reinforce democracy by creating a sense of community and solidarity vis-à-vis the external world. This more inclusive notion of nationalism, encompassing all those residing within a defined territory, enjoying rights as equal citizens and sharing a set of collective values and aspirations, is being shrunk by populism into a narrower and more exclusive category in which the label of ‘anti-national’ is patched on to the charge of being anti-people or belonging to an ‘alien’ category. It is the fusion of populism with narrow nationalism which poses particular danger to a plural and inclusive democracy. It complicates foreign policy by injecting a domestic dimension into relations with states. This is evident in India’s Pakistan policy. The label of pro-Pakistan is used to discredit political adversaries so it helps to keep projecting it as enemy.

There is pervasive reaction today against globalisation, which has spawned economic inequalities, created winners and losers between and within countries, threatened a loss of identity and cultural moorings and fostered psychological uncertainty. Globalisation and economic interdependence demand international governance structures but the fragmentation of the world into independent sovereign states makes this difficult to achieve. Governments are unable to deliver national solutions to such cross-border challenges and this lies at the root of resentment and frustration which are engendering populist-nationalist movements in country after country, mostly in the West but also in other regions. The inability of elected governments to find solutions in democracies is breeding growing dissatisfaction with democracy itself. The success of authoritarian China in delivering economic success is reinforcing what one may describe as ‘dictator envy’ in democracies,  enhancing the appeal of authoritarian leaders. Societies become polarised and ethnic, sectarian and religious fault lines resurface, sometimes in virulent form. These feed into both populism and intransigent nationalism. These trends are evident in many parts of the world and are emerging in India as well. They need to be tamed before they shatter the vision of an inclusive plural democracy enshrined in our Constitution.

In the recent state elections, a substantial number of voters appear not to have been swayed by appeals to communal and sectarian sentiments. Their concerns were more local and economic. But one should not underestimate the power of the populist-nationalist narrative in the country and the spread of the communal virus. We have seen the increasingly aggressive assertion of group identities. Violations of the rule of law and the undermining of the integrity of institutions are becoming endemic. The killing of a police officer in Bulandshahr by cow vigilantes is only the latest in a string of such incidents. Instead of enforcing law, parties across the spectrum often seek political gains through acquiescing in or even encouraging populist tendencies. Digital communication and social media are amplifying populist messaging. Communication specialists are becoming more important than party cadres. These are the real sources of concern about Indian democracy and it is unlikely that the recent elections or the forthcoming general election will resolve them. That would require enlightened political leadership which remains in short supply.