Srinagar: Copying the style of global Islamist movements, Burhan Muzafar Wani, a young militant commander in Kashmir, has released a rare video statement in which he makes a call to arms and vows to fight for the establishment of caliphate. 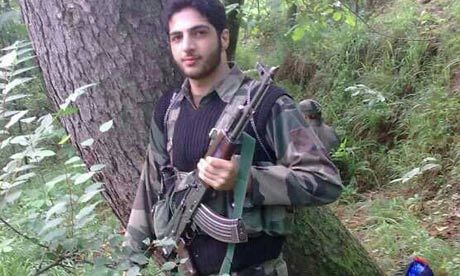 Copying the style of global Islamist movements, Burhan Muzafar Wani, a young militant commander in Kashmir, has released a rare video statement in which he makes a call to arms and vows to fight for the establishment of caliphate.

The six-minute video which features Burhan is being circulated via mobile messenger applications and social networking sites. It also shows two militants standing guard as Burhan sits with an assault rifle and a copy of the Koran in front of him and urges youth to pick up arms.

Burhan’s video message to the region’s youth, clerics and policemen hints at a drift in the ideology of Kashmiri militants from a localised anti-India rhetoric to a broader pan-Islamist agenda of establishing a caliphate, the cause espoused by the Al-Qaida and Islamic State.

Burhan is the divisional commander of the Hizbul Mujahideen in south Kashmir, which makes him in charge of the militant organisation’s affairs in at least four districts.