Notes for all seasons

The majestic 15th century Mehrangarh Fort in Jodhpur has witnessed bloody battles, march of glinting palanquins, artistic flair of sculptors and painters, besides the rise and fall of supremacy. 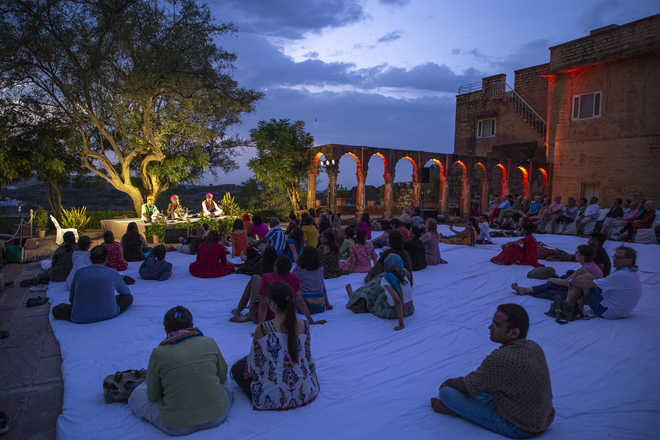 Culture travel: A performance in progress at RIFF, Jodhpur. For these festivals, the backdrop is as important as the music itself Photos courtesy: Ojio

The majestic 15th century Mehrangarh Fort in Jodhpur has witnessed bloody battles, march of glinting palanquins, artistic flair of sculptors and painters, besides the rise and fall of supremacy. More than 500 years after it was constructed, its walls are still privy to legendary episodes. Only, these are in the form of magical stories, exhilarating music and an amalgam of creativity from the rugged land that it stands on, with talent from across the world. Each year, five days of October are reserved for the Rajasthan International Folk Festival (RIFF). Started in 2007, as a not-for-profit partnership between the Mehrangarh Museum Trust and Jaipur Virasat Foundation, the festival has found a chief patron in Maharaja Gaj Singh. The festival was started as a platform to promote traditional folk music of Rajasthan. It also offered international artistes an opportunity to play with the Rajasthani musicians, creating unique sounds for the limited and highly engaged audience. 2018 was no different. True to the spirit of the RIFF, musicians from Spain, Portugal, USA, Reunion Islands, Tehran and more came together with stalwarts of Rajasthani folk music to create magic.

RIFF is the most convincing case in point that multi-genre music in India has a riveted set of ears. The change in the musical landscape over the past 10 years hasn’t come without the trials but it is certainly in bloom. New entities have followed RIFF in the same spirit, carving out a niche for music lovers.

Latest on the scene is Bengaluru-based Beantown Backyard Festival that stands for ‘everything Bangalore.’ The first edition of the festival was held at the foot of Nandi Hills in October this year, where more than 30 music bands spanning genres like traditional folk, rock, reggae, roots, Afrobeat, Balkan, swing, Jazz, electronica and more came together over two days. While the festival added more hooks for the young crowd — camping, yoga, ballooning, beers and food trucks — it was the music that amped up the evenings.

Between the latest Beantown and the longstanding RIFF, there are many those have cropped up and are moving rapidly to larger scales. India’s largest EDM festival, Sunburn was first stationed in Goa when it started on the Vagator beach in 2007, and then subsequently moved to Pune. Its persistent place on the end of the year calendar paved the way for electronic music in the country, eventually making it the third largest dance festival in the world. EDM may have been the flavour of the last decade, but folk and fusion genres have also found an abiding space on the scene.

Regulars to Ziro in Arunachal Pradesh have stumped naysayers that the festival was too far and inaccessible. The festival started in 2012, showcasing the best of India’s Indie crew. Over the years, the line-up has only become more robust with international and Indian artistes livening up the idyllic home of the Apatani tribe. The idea is to promote both international artistes and local performers. This year two of the popular local performances included Arunachal Pradesh’s rap sensation K4 KEKHO and the underground rap act Cryptographik Street Poets from Shillong, among many others. There’s no doubt that copious amount of the Apong (rice beer) helps in keeping the spirits high (quite literally). Apart from bringing great international acts to India, Ziro is also focused on sustainability, community outreach and waste management at the festival since people can camp on the festival grounds.

India on the mind

Then there are others that have sparked the idea of culture travel by using alternative music festivals as a hook. For these festivals, the backdrop is equally important as the music itself. From coffee-clad hills of Coorg to Rajasthan’s ancient havelis, these festivals are ideal to see India with another eye. Enchanted Valley Carnival, Storm Festival in Coorg, Magnetic Fields in Rajasthan, and even the relatively more mainstream NH7, come to mind.

Festivals are no longer hinged on rock, pop or Bollywood. These are perfect stages to find listeners to explore different genres. A regular on the alternative music scene, Rajasthani group called the Manganiyar Seduction has been an audio-visual treat. Taking the vision of director, Roysten Abel, they’ve transported audiences to the haunting dunes of the desert, while sitting in a grid of pods versus a stage. In the same way, the voices of Bhanwari Devi, Parvathy Baul, Mame Khan and others have deeply affected the hearts of listeners in India.

Not only is the music festival scenario brimming with new sounds, music has found a strong footing as part of other themed festivals too. The Covelong Point Festival, focused on surfing, has a big music component, along with yoga. No longer do people have to travel to the hills of Arunachal Pradesh or the coffee-clad hills of Coorg. In-city gigs give a sound space to musicians to create fresh sounds. Each has its own vibe but the energy is ubiquitous, and the love for new, unheard sounds trumps everything else.

US-based Gene Peterson was enthralled during a practice session with Rajasthani khartaal players during the RIFF. “I was watching Khete Khan’s fingers closely when he was playing the khartaal. His fingers flew with such dexterity, denying any sense of human ability. That’s the thrilling part of making music with new people.”

If it’s exciting for co-musicians, it’s only scintillating for the Indian audience. Fortunately, there will be many more occasions apart from RIFF for the festival-goers of India.