Are you in romance with the sand dunes of Rajasthan, or in love with the state’s desert beauty — the forts and palaces caressed by manmade lakes? Read on, the present grimness of it. 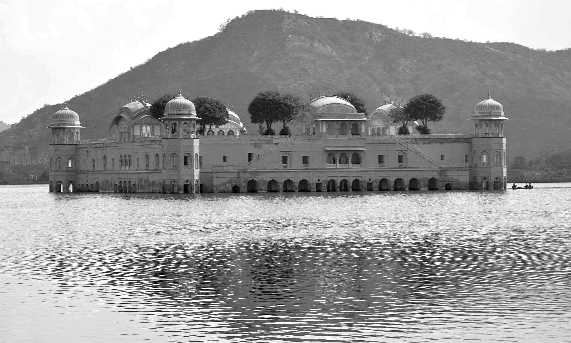 Jaipur’s Jal Mahal in happier days: The CSE report warns of an impending danger to water bodies in Rajasthan.

Are you in romance with the sand dunes of Rajasthan, or in love with the state’s desert beauty — the forts and palaces caressed by manmade lakes? Read on, the present grimness of it. A report of the Centre for Science and Environment (CSE) warns of rising crimes related to environment, prompting director-general Sunita Narain to assert that “we need to challenge the polluted model that has pushed us to the brink.”

There are two key parameters of assessing Rajasthan’s development: one is the economic status that is portrayed as good. Another is the environment status. The state government, led by BJP’s Vasundhara Raje, credits itself for having emerged out of the category of the ‘sick’ states. The Department of Industrial Policy Promotion along with the World Bank placed Rajathan on 8th place in the Ease of Doing Business rankings.

The big debate is on the environmental status: is Rajasthan facing an environmental and population pressures intensifying man-animal conflict?

Rajasthan has barely 1.16% of the water resources of the country. The average rainfall ranges from 150 mm in its western part to 900 mm in the east. The erratic rain caused drought or scarcity-like situation every year in various parts of the state. Agriculture production to a great extent is critically dependent on vagaries of the monsoon. Worse, groundwater resources are depleting fast and turning the land into dark zones.

The CSE study points to the crime figures: environmental crimes in the country registered a 12% decline in 2014 and 2015, but Rajasthan and Uttar Pradesh accounted for 75% of such cases. Under various laws, 2,074 environment-related offences were committed in Rajasthan in which 2,361 people were arrested in the state. In Uttar Pradesh there were 1,779 cases and 2,966 people were arrested under similar laws.

Sunita Narain says the lessons of the past two years are that environmental issues cannot be ignored because life and health have to be secured,

Begin it with water

Three of Rajasthan’s most popular lakes — Jal Mahal, Jaisamand, and Udaisagar — are among the most severely polluted water bodies in the country. Almost all water bodies of Udaipur, popularly called the ‘City of Lakes’, are highly polluted and encroached upon. The condition of Pichola Lake is symptomatic of the ills that plague the lakes and rivers of the city.

Once an important source of drinking water, the lake today is surrounded by 55 raw sewage inlet points that carry untreated effluents from over 3,500 industries. The city’s lake are also choking due to siltation. This is inspite of the fact that the state government has earmarked a budgetary support of Rs. 157.61 crore for water harvesting and plantation in 17 districts. Water resource projects worth over Rs. 12,000 crore, too, are in the pipeline.

In Rajasthan, 13 of 25 Lok Sabha MPs have not adopted a village, while 9 out of 10 Rajya Sabha MPs did not care at all. Only Himachal Pradesh has managed to meet more than 85% of its soil health card (SHC) distribution targets.