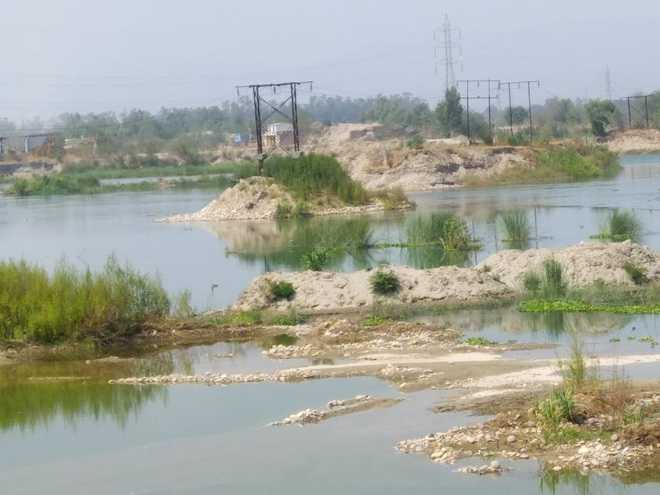 Mining mafia has dug up sand in the Sutlej riverbed near Sangatpur village in the Nurpur Bedi area. Tribune photo

Mining mafia digging riverbed around power supply towers near Anandpur Sahib has put Electricity Department officials on toes. It is apprehended that these towers with damaged foundations can be washed away during the monsoon and plunge nearly 150 villages into the dark. The officials are working day and night to make alternative arrangements so there is no major blackout in the area.

This has led to long and frequent power cuts in Nurpur Bedi villages. Irked over power cuts, locals have been staging protest almost every day.

The foundations laid in the riverbed to erect three towers to supply power to these villages have already been washed away during the last monsoon as the sand had been removed around the foundation of these towers.

A total of 138 villages, including Nurpur Bedi, were being supplied power through a 33 kv line from Anandpur Sahib till a few years ago. As the demand of power started increasing, the area was being supplied 66 kv power through old power lines which used to create frequent faults. In order to overcome this problem, the department decided to lay a new power supply line for which new towers were installed. Three of these new towers were to be set up in the Sutlej riverbed near Sangatpur village. As soon as the foundations were laid for these towers, mafia dug up sand around their foundation. These foundations were washed away during the monsoon and officials abandoned the work of laying the new power line.

In December last year, it was noticed that the foundations of three old poles in the riverbed being used to supply power to these villages have also been exposed as the sand around these was dug out illegally.

Bhag Singh, SDO, said sand around the poles had been dug out and power could be disrupted during the monsoons if any of these poles were washed away. He said two new towers would be set up, one each on both sides of the river, so that the flooding of the river does not damages the towers.