SRINAGAR: Two Junior Commissioned officers (JCOs) of the Army were killed in ceasefire violation by Pakistan along the Line of Control in the frontier Kupwara district, officials said. 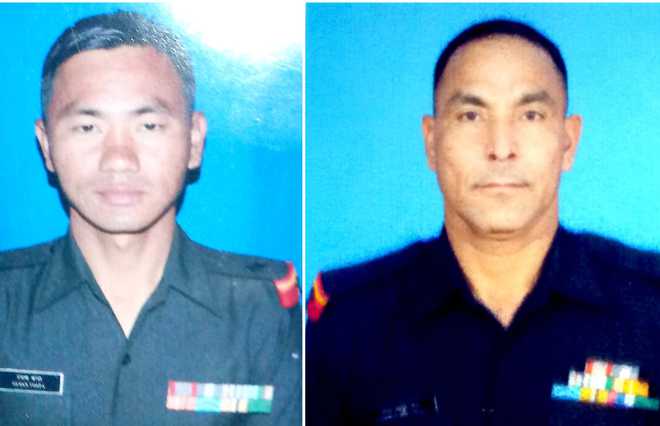 Two Junior Commissioned officers (JCOs) of the Army were killed in ceasefire violation by Pakistan along the Line of Control in the frontier Kupwara district, officials said.

While initial indications are that the two were hit by sniper fire, the Army termed it “unprovoked ceasefire violation” by Pakistan, which was retaliated to strongly.

Sources said the incident took place at Jumagund in the Keran sector around noon, when Pakistan troops targeted an Army post manned by 2/8 Gorkha Rifles some 500 metres inside the LoC.

“In the Pakistan firing, Subedar Gamar Bahadur Thapa, 42, was killed on the spot, and Subedar Raman Thapa, 29, critically wounded. He was shifted to the Army Base Hospital in Srinagar, where he succumbed to injuries,” an official said.

“There was unprovoked ceasefire violation by Pakistan in the Keran sector,  our  troops retaliated strongly. Two soldiers were martyred in enemy fire,” a Srinagar-based Army spokesman said.

The Army launched a massive combing operation in the sector as they suspected the violation by Pakistan might have been aimed at pushing infiltrators from across the border.

“The combing operation is still under way in the dense forest area to see if the firing was carried out to push infiltrators,” a defence official said.

This is the second ceasefire violation along the LoC in Kupwara district this month. On December 6, a soldier, Rajesh Kumar, was killed in truce violation in the Machil sector of Kupwara.

As many as 89 security men have so far been killed in the line of duty in Kashmir this year. Incidentally, this is the highest casualty figure for the forces in the past decade. Over 235 militants have also been killed this year.