SRINAGAR: Kashmir’s Shri Pratap Singh Museum is a treasure trove for art lovers, history enthusiasts and curious minds as it houses rare artefacts and items of historical significance, showcasing the rich cultural heritage of the state. 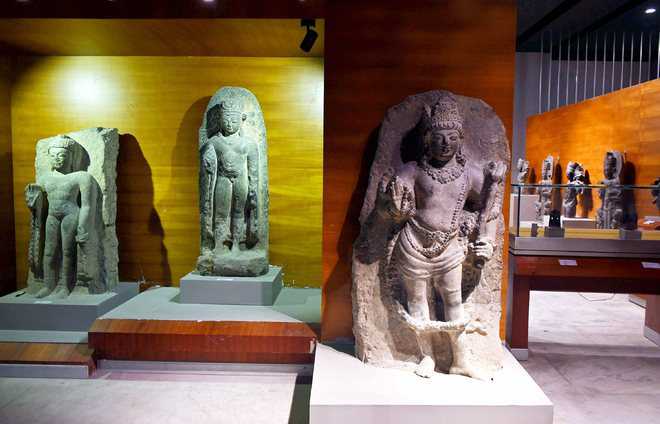 Sculptures of various deities on display at the Shri Pratap Singh Museum in Srinagar. PTI

Kashmir’s Shri Pratap Singh Museum is a treasure trove for art lovers, history enthusiasts and curious minds as it houses rare artefacts and items of historical significance, showcasing the rich cultural heritage of the state.

Situated on the banks of the Jhelum river in the Lal Mandi area of the summer capital here, the lone museum of Kashmir was established in 1898 by the then Dogra ruler of Jammu and Kashmir, Maharaja Pratap Singh, in his summer guest house, largely based on collections transferred from the state “Toshkhana” (palace treasury).

A century later, the museum got a new building – adjacent to the old one.

Though it has not been completed yet, the museum was thrown open to public recently owing to widespread demand from different quarters.

The foundation stone of the new building was laid in 2008 by the then Chief Minister, Ghulam Nabi Azad, and the construction was handed over to the Police Housing Corporation, which was scheduled to complete it in two years.

Approximately 80,000 artefacts and objects ranging from archaeological items, sculptures, numismatic items, decorative art, weapons, paintings, anthropological and natural history items and textiles are housed in the museum. The three-storey building has 10 major galleries — archaeology, numismatic, decorative art, jewellery, culture and society, arms and armoury, textile, painting, manuscript and natural history. It provides a multi-layered history of the cultural heritage of the state. The ground floor exhibits the antiquity of humans in Kashmir followed by the developments that gave rise to the settlements around 5,000 years ago. “The work of art in terracotta, as old as second century BC, stone and bronze showcases the archaeological development and the vastness of the cultural heritage of the state,” Director, Archives, Archaeology and Museums, Jammu and Kashmir, Mohammad Shafi Zahid said. Zahid said the new complex had been designed in a way that a visitor started his journey of Kashmir’s history corresponding to 5,000 years before present. The visitor then follows the Buddhist, Hindu, Muslim and other eras.

“The archaeological gallery narrates the history of man in Kashmir from around two million years down up to 5,000 years before present when he settled down and built villages to introduce farming for sustenance,” he said.

“The terracotta gallery exhibits the works from the first to eighth centuries that mostly remained associated with the Buddhist faith,” he said. The Director said the museum had sculptures of various Hindu deities from the eighth, the ninth and the tenth centuries, carved in single stones.The bronze sculptures from the ninth century belonged to various religions.

The numismatic gallery has been arranged in such a way that it shows a visitor the evolutionary development of coins starting from the third century BC.

“Punch-marked coins, Greek-era silver coins, Mughal, Afghan and Dogra-era coins are on display in the museum and narrate the evolution of currency at different stages along with the political and economic situation of the country,” he said.

Zahid said the museum had one of the richest artefact collections in India.

“There are many unique and rare collections in the museum. For instance, the Gilgit manuscripts with painted covers of the seventh century regarding Buddhism, a rare bilingual birch bark document in Shardha and Persian of the 16th century relating to the purchase of land and a copy of Shahanama Firdausi (world’s longest epic poem written by a single poet),” he said.

Zahid said while most of the galleries had been shifted to the new complex, there were some such as the painting, manuscripts and natural history galleries which were still housed in the old building. The new building has large open-spaced reserves and new display techniques for dissemination of knowledge. The new museum complex has a 65-foot deep foundation, and is quake and fire resistant, damp-proof and highly secure. It has been designed by local architects and the exteriors depict the traditional Kashmiri architecture even as the interiors have state-of-the-art facilities. Zahid, however, added the museum lacked a back-up generator as well as human resources such as sweepers etc. — PTI