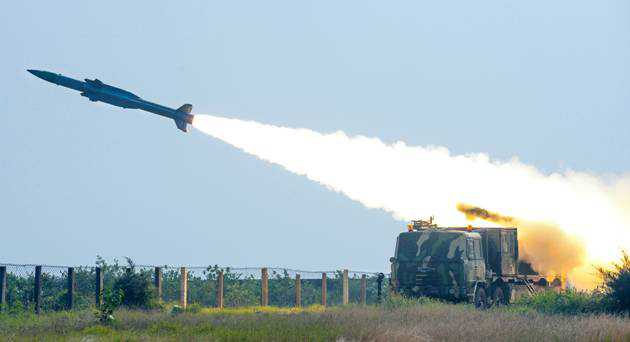 The state-of-the-art indigenous missile targeting an UAV 'Banshee', was fired from the launch complex-III of the Integrated Test Range (ITR) at Chandipur near here this afternoon.

"The radars, telemetry and electro-optical systems along the coast have tracked and monitored all the health parameters of the missile," an official statement said.

The supersonic missile is the first surface-to-air missile with indigenous seeker to be test fired and is being inducted into the Army as short range surface to air missile.

With the successful test firing, India has achieved the capability of making any type of surface-to-air missile, defence sources said.

Akash has a strike range of about 25 km and carries a 55-kg fragmentation warhead that is triggered by proximity fuse.

Developed by the Defence Research and Development Organisation (DRDO), the Akash missile system has the capability to neutralise aerial targets like fighter jets, cruise missiles and air-to-surface missiles as well as ballistic missiles.

The system is designed to neutralise multiple aerial targets attacking from several directions simultaneously. The system is autonomous and its operation is fully automated.

There is flexibility in deployment, they said.

The radio proximity fuse has advanced signal processing features. Together with the pre-fragmented warhead and safety arming mechanism, a high kill probability of manoeuvring targets is assured.

The launch operations were witnessed by Director General (Missiles) of DRDO and Scientific Adviser to the defence minister G Satheesh Reddy and other senior officials of the Defence Research and Development Organisation (DRDO).

Reddy congratulated all the DRDO scientists and Armed Forces for the successful test firing of Akash, the statement said. — PTI