Muslim vote division did it for BJP

The question that has remained in the discourse in academia, drawing rooms and within Muslim organisations is—Did the Muslims vote for the BJP contributing to its landslide victory with 325 seats (along with allies) in a House of 403? 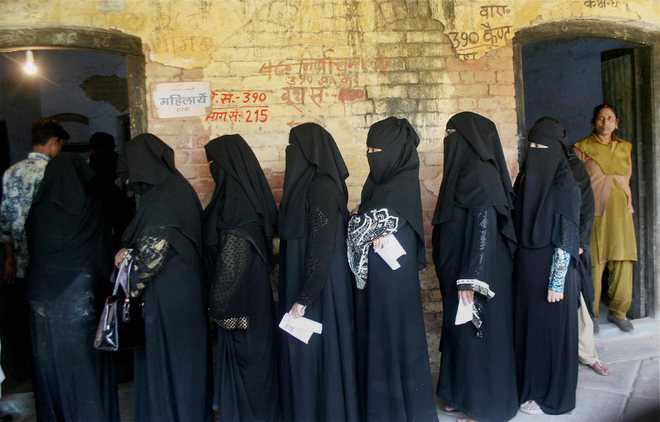 Muslim women queue up at a polling booth in Varanasi during the recently held UP election. PTI

The question that has remained in the discourse in academia, drawing rooms and within Muslim organisations is—Did the Muslims vote for the BJP contributing to its landslide victory with 325 seats (along with allies) in a House of 403?

The answer is no rocket science. Let’s take the example of what happened in Deoband in Saharanpur. The same pattern was replicated in varying degrees all over the state with identical results.

This constituency, the seat of the famous Islamic seminary, reportedly has 70 per cent Muslim population. Here BJP’s Brijesh won by polling 1,02,244 votes defeating his nearest rival Majid Ali of the BSP by 29,400 votes. Before hastily drawing any conclusion take into account that Samajwadi Party’s candidate Mawiya Ali had polled 55,385 votes.

Together the two Muslim candidates from the BSP and the SP polled 1, 28,229 which are 25,985 vote more than what was polled by the BJP candidate.

According to 2014 report of political scientist Gilles Verniers for the Hindu Centre for Politics and Public Policy in Uttar Pradesh, Muslim vote is a determining factor in around 130 of its 403 Vidhan Sabha constituencies.

Like 2014, the message that the BJP has sent out loud and clear in 2017 as well is that Muslims are totally irrelevant in their brand of politics. The BJP did not field a single Muslim candidate. BJP national president Amit Shah defended his decision by citing the “winniability factor”.

After the recent Assembly poll results, the Muslims, who comprise 19.2 per cent of Uttar Pradesh’s population, have only 5.9 per cent representation with only 24 seats in the newly elected Vidhan Sabha.

In the outgoing Vidhan Sabha, the Muslims had 17.1 per cent representation with 68 seats which was the closest to their share of population. The emerging pattern reveals that more than the BJP, the damage was due to the secular parties’ strategy.

Perhaps the worst effect on poll results was that of Mayawati’s so-called Dalit-Muslim strategy under which her party fielded 99 Muslim candidates on seats where the Samajwadi Party or the Congress had sitting Muslim MLAs.

There were 35 seats where the SP and the BSP both had fielded Muslim candidates. Of these, the BJP managed to comfortably win 27 seats due to division of votes.

The extraordinary performance of the BJP in western Uttar Pradesh and Devipatan division  (comprising Gonda, Bahraich, Shrawasti and Balrampur districts) can largely be attributed to Mayawati’s  new social engineering formula due to which even her Dalit and SP’s Yadav votebank gravitated towards the BJP. Another example of Mayawati’s failed social engineering formula is the fact that her party miserably failed at 85 reserved seats for which every political party fields only Dalit candidates.

The BSP, considered to be the party founded for empowering the Dalits, which constitute around 21 per cent of the population, managed victory on only two reserved seats—Lalganj in Azamgarh and Sidhauli in Sitapur.

More shocking is the fact that on 50 per cent of the reserved seats, the BSP could not even secure the second place. Of these 85 reserved seats, the BJP won 69. Three seats each went to BJP’s allies—Union Minister Anupriya Patel’s Apna Dal and Om Prakash Rajbhar’s Suheldev Bharatiya Samaj Party—taking the tally to 75.

While these are not the only reasons for the BJP’s landslide win, these do explain to some extent a few of the decisions that helped them strike gold in Uttar Pradesh.