LUDHIANA: The pastor of a local church was shot dead by two assailants at Peerubanda Mohalla around 8.45 pm today. 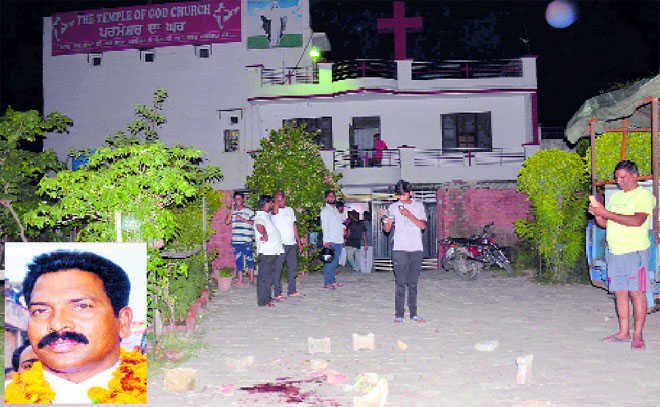 The pastor of a local church was shot dead by two assailants at Peerubanda Mohalla around 8.45 pm today. The bike-borne assailants fired multiple shots at the pastor, killing him on the spot. The deceased, Sultan Masih, sustained two bullet injuries in the chest and one in the head.

Masih also runs a school for poor children inside the Temple of God church. He is survived by his wife Sarabjit and sons — Alishah (26) and Hanok (18). Members of the community assembled outside the church and expressed anger at the attack. Police Commissioner RN Dhoke later visited the scene and urged them to maintain peace.

Dhoke said CCTV cameras installed at the church captured the images of the assailants, but they could not be identified since it was dark.

Dhoke said two assailants came on a Pulsar motorcycle and shot the pastor, who was talking on the phone outside the church. Two minors witnessed the crime. “We were playing near the church when two men arrived on a bike and shot the pastor. We raised the alarm and informed his family. He was taken to the DMC Hospital in a car,” said one of them.

Sources said two empty cartridges were recovered from the scene. Last year, the daughter of the paster’s brother had died when she was hit in the head by a javelin at the sports stadium.