Rahane among runs as Indians 174/5 at lunch

COOLIDGE (ANTIGUA):India vice-captain Ajinkya Rahane got much-needed runs under his belt ahead of the first Test as the visitors reached 174/5 at lunch on the final day of the warm-up game against the West Indies A. 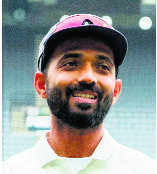 India vice-captain Ajinkya Rahane got much-needed runs under his belt ahead of the first Test as the visitors reached 174/5 at lunch on the final day of the warm-up game against the West Indies A.

Rahane, who has not scored a hundred in more than two years, made a fighting 54 off 162 balls before a reverse-sweep led to his dismissal. Rahane, who is the stand-in captain in this game, had come to open the innings after failing in the first essay.

The Mumbai batsman had looked horribly out of touch during his 35 overs at the crease on Day 2. His unbeaten 20 on Sunday had three boundaries but he played more than 80 dot balls, a testimony to his struggles. Rahane and Hanuma Vihari had resumed the innings at 84/1 and both batsmen managed to score half-centuries. Vihari, who was on 48 overnight, went on to make 64 off 125 balls in an innings comprising nine fours and a six with the Indians extending their lead to 279 runs.

Off-spinner Akim Frazer removed both Rahane and Vihari while Rishabh Pant and Ravindra Jadeja were the other batsmen to be dismissed. Wriddhiman Saha (6) and R Aswhin (5) were in the middle when lunch was called. On Day 2,  Ishant Sharma bowled a fiery opening spell while left-arm wrist spinner Kuldeep Yadav promised to pose stiff competition for Ashwin as the Indians dominated proceedings.

Gill, Anmolpreet in TEAM FOR s africa a series

Mumbai: Manish Pandey was named India A captain for the first three One-dayers against the touring South Africa A, while Shreyas Iyer will lead in the last two matches of the series beginning August 29 in Thiruvananthapuram. Shubman Gill is there in both Pandey’s and Iyer’s teams and so are Vijay Shankar, Anmolpreet Singh, Ricky Bhui, Shardul Thakur, Axar Patel and Nitish Rana. Ishan Kishan was picked as wicketkeeper in the team led by Pandey, while Sanju Samson will do duty behind the stumps under Iyer’s captaincy. Leg-spinner Yuzvendra Chahal is part of the team for the first three matches. The matches will be played at The Sports Hub in Thiruvananthapuram on August 29, 31 and September 2, 4 and 8. — PTI

Bengaluru: Heavy overnight rain washed out the entire third day’s play in the Duleep Trophy opener between India Blue and India Green here today. The second day’s proceedings on Sunday had also been washed out due to wet ground conditions. With only 49 overs having been bowled so far and no innings completed, the match is headed for a stalemate. India Green had reduced India Blue to 112/6 in 49 overs on a truncated opening day on Saturday. — PTI