LUDHIANA:Incessant rains in the last few days have thrown life out of gear in the region. 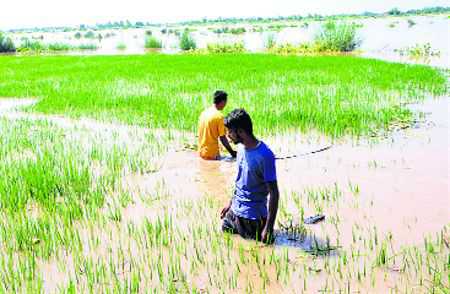 Farmers assess the damage to paddy crop in Tarn Taran.

Incessant rains in the last few days have thrown life out of gear in the region. The flood-like situation has created panic among villagers. Overflowing drains and water accumulated in fields have affected paddy, maize and vegetable crops in the region falling under Sangrur and Ludhiana districts.

Owners of fields whose top layer of soil has been washed away are among the worst-affected as waterlogging is likely to cause more damage to their crops.

Meanwhile, office-bearers of organisations working for the welfare of farmers have demanded compensation for losses suffered by farmers of the region.

Farmers tilling land on rent are the worst-hit. “Though it is not possible to ascertain the exact amount of loss, the government should order a special girdawari without delay so that farmers can be paid compensation,” Latala added.

Crops on hundreds of acres in Samrala and Machhiawa region were badly hit due to flooding of fields. In Machhiwara, the worst-hit areas are Garhi Bet, Powat, Majra, Ratipur Bet, Jhungian , Guru Garh and Urna.

Harvinder Singh and Jatinder Singh of Machiwara area said they had suffered huge losses. “We had cultivated vegetables on 10 acres along the Machhiwara-Rattipur road, hoping to earn a livelihood for a year. But our crops have been damaged and we are yet to pay balance amount of rent for land,” they said.