BATHINDA: Members of the Bharatiya Kisan Union (BKU) Ugrahan on Monday held meetings in six blocks of the district ahead of their statewide protest rally on July 26. 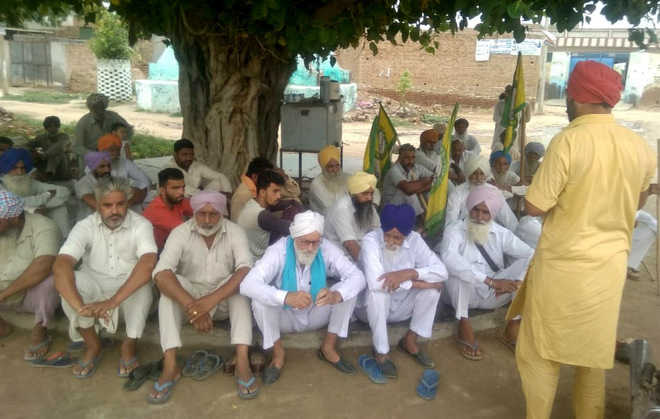 Members of the Bharatiya Kisan Union (BKU) Ugrahan on Monday held meetings in six blocks of the district ahead of their statewide protest rally on July 26.

Notably, the members have been seeking the arrest of commission agents, who were booked on the charge of abetment to suicide in connection with the death of Manjit Singh, a farmer from Bhucho Khurd.

Exhorting them to participate in the statewide protest rally on July 26, they held meetings with farmers of Mehma Sarja, Nihal Singhwala, Mehma Sarkari, Deon and Jhumba villages.

Notably, the farmers had observed an indefinite protest outside the Cantonment police station in the city last month demanding action against the commission agents. They had subsequently called off their protest.

The union leaders had said when they had urged the Senior Superintendent of Police (SSP) to arrest the suspects in the case during a meeting with him on June 17, the latter had sought two days for it.

Shingara Singh Mann, a farmers’ leader, said, “We have been holding meetings at different villages to mobilise the support for the state-wide protest rally on July 26. We want justice and appropriate action against the culprits for abetting suicide of a farmer. Evasive attitude or inaction on the part of the police will not be tolerated at all.”

The farmers’ leader added, “The police are working under political pressure and delaying the arrest of the suspects. Manjeet had sold off his land for Rs45 lakh, of which he had kept Rs20 lakh with these commission agents. However, when he approached them to get his money back, they refused to return the money. Upset over it, Manjit had consumed some poisonous substance on January 26 and he breathed his last on February 8.”