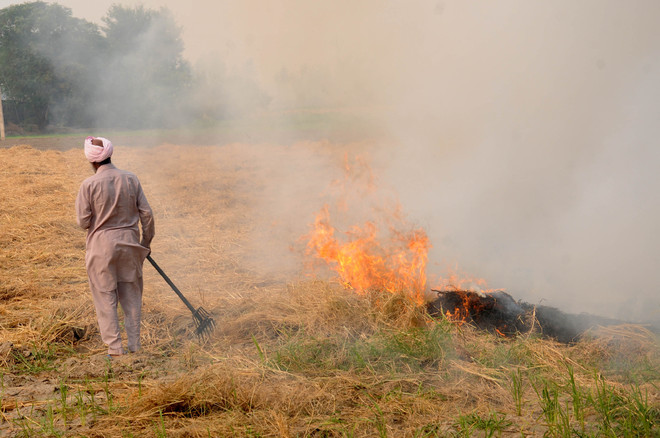 The district has witnessed 5,549 paddy stubble fire incidents this year so far, which is the second highest in the state after Sangrur. The paddy stubble burning has been going on unabated in the district despite more than 100 cases registered by the police against erring farmers after Supreme Court summoned Punjab Chief secretary over pollution by stubble burning.

Despite a ban by the state government, the unhealthy practice of stubble burning goes on unabated in Bathinda district and other parts of the region.

The burning of stubble immensely harms the environment as uncontrolled fire also destroys the flora and fauna on roadsides and in the forest areas, besides affecting the soil health.

The illegal practice becomes dangerous amidst high velocity winds when the fire spreads across vast areas of land. The fire also poses a threat to residential areas situated nearby and the ripened standing crops and vegetables.

A visit to the nearby villages revealed that farmers burn the paddy stubble late in the evening to avoid any action.

Sources said there were numerous solutions and alternatives available to the farmers, who can refrain themselves from putting the paddy stubble on fire, but these solutions fail to gain mass acceptance.

Burning of stubble also leads to rise in air pollution and precipitates numerous ailments associated with respiratory tract. The number of patients complaining of such ailments is on the rise at various hospitals in and around the city.

Stubble burning not only affects the soil fertility resulting in loss of essential nutrients but also poses a serious threat to human health, including diseases such as breathing problems, allergies and asthma attacks.

Farmers say they acknowledge the adverse effects of burning of crop residue but they have no alternative, whereas environmentalists demand a strict ban on it.