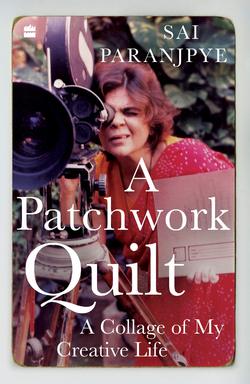 It began as a weekly chronicle of her memories — and Sai Paranjpye realised it had not been a life entirely without purpose. That series of articles in a Hindi daily has now assumed a life of its own, transformed into a 400-plus page book dedicated to her various pursuits — theatre, radio, films. She has lovingly named it ‘A Patchwork Quilt’.

The book is Sai’s attempt to make an honest evaluation of her life, one that has enriched ours too, with comedies such as ‘Chashme Baddoor’ and ‘Katha’, social dramas like ‘Sparsh’ and ‘Disha’, and children’s films like ‘Jadoo ka Shankh’ and ‘Sikander’.

Born to a painter father from Russia, and writer mother Shakuntala Paranjpye, Sai’s parents separated when she was two. She grew up in a household crammed with books from ceiling to floor and Sai was brought up on an equal dose of English and Sanskrit, the former via her nana, RP Paranjpye, a renowned mathematician and educationist, and the latter courtesy her mother, who wrote and directed plays. Even though her first job was with radio, Sai too took to theatre naturally, landing at the National School of Drama that had appealed to “the stage-struck youth of India to embark on a new adventure”. Sai found herself before the interviewers, one of whom sneered at the woman candidate who could “drop everything and run off to get married”. Sai promised she wouldn’t disappoint them for she had married just a month ago!

She was to share time and space with the likes of Om Shivpuri, BV Karanth and Punjabi thespian Harpal Tiwana. An illustrative career in theatre followed, only her karmabhoomi shifted from Pune to Delhi to Mumbai. The book is replete with memories of various plays, terrace rehearsals, the actors, the costumes, her daughter Winnie’s phobia of the audience before a certain play.

Her films, our constant companions with the vibrant 1980s and ’90s, and her actors, who power our films even today, cover the later part of the book, endless stories filling up page after page. She, however, regrets not being able to write much on her journeys abroad, her years as head of Children’s Film Society of India. The quilt was becoming alarmingly oversized, she laughs. As she picks it up and folds it, her fans aren’t complaining. They will always have the warmth of her work to return to. — TNS